As the Rutherford medal winner, Professor Tate also receives $100,000 in award money from the Government. 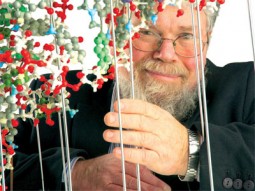 The President of the Royal Society of New Zealand, Dr Garth Carnaby, says Professor Tate has had a ‘stellar career ‘which continues to flourish, with groundbreaking discoveries in understanding fundamental elements of cell biology.

“His work has made a huge contribution to health research with potential applications for preventing and treating HIV-1 and neurological diseases such as Alzheimer’s.

“Professor Tate’s research has revolutionised our understanding of how proteins are synthesised in living cells. This has had important implications for research looking at how proteins contribute to memory formation and neurological disease.”

“Professor Tate’s exceptional contributions extend well beyond the laboratory, with his teaching having inspired countless budding researchers. Many of his former students now have outstanding research careers both in New Zealand and internationally.

“He has also devoted considerable energy to science policy and funding, playing a prominent role nationally and internationally.”

Early in his research career Professor Tate discovered by chance a new mechanism for gene regulation, leading to a study of the mechanism in HIV-1 as a potential drug target.

In addition to his fundamental molecular biology research, he has been involved in a completely different research area, molecular neurobiology, looking at the molecular mechanisms of neurological diseases.

An interest in the molecular basis of memory has progressed to the development of brain protein fragment that can restore memory, and has potential as a therapeutic agent for Alzheimer's disease.

In very recent studies Professor Tate and his students have begun to investigate the molecular biology underlying chronic fatigue syndrome.