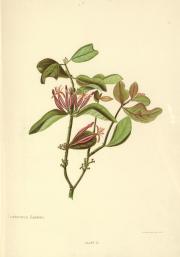 Artist Georgina Hetley’s inspiration to paint botanical specimens came from an 1881 Auckland lecture by scientist Thomas Cheeseman. Hetley was a financially-secure widow and with some travel sponsorship could afford to journey around New Zealand painting wildflowers. Along the way, she saw much native habitat lost to burning and cultivation. Her painting of the native mistletoe Loranthus adamsii (left) is a valuable record for botanists today – it was collected extensively near Thames in 1880, but is now considered extinct.1

In 1886 Hetley travelled to London to find a publisher for her book Native Flowers of New Zealand and exhibit work at the important Colonial and Indian Exhibition. She also spent time working under eminent botanist Sir Joseph Hooker at Kew Gardens, a centre for scientific research. Her book included three pages of scientific dissections and was marketed with glowing letters of recommendation from New Zealand natural historians.2