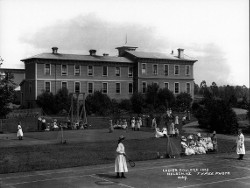 Kate Edger was the first New Zealand woman to gain a university degree and thought to be only the second in the entire British Empire.1 Edger received her earliest education from her father, a Baptist Minister.  Edger became the only female pupil at Auckland College and Grammar School – there being no equivalent girls school at the time. When she then applied to the University of New Zealand for permission to compete for a mathematical scholarship, Edger included her age and qualifications – but not her gender.
The university was keen to increase student numbers, so quietly accepted the application.

In 1877 Edger completed her degree, ending an attempt to fob off women with a lesser “certificate”.2 Over a thousand people came to the graduation ceremony and the New Zealand Herald commented: “Let us hear no more about the intellectual inferiority of women.”3

Edger taught briefly in Christchurch, then became the first Principal of Nelson College for Girls (right).