Gravitational waves – ripples in space-time caused by accelerating massive objects – were predicted by Einstein’s general relativity theory in 1916, but not directly measured until 2015. For the first time, international scientists from the Advanced LIGO (Laser Interferometer Gravitational-Wave Observatory) and Advanced Virgo teams have observed these waves traveling through space-time that originated from a cataclysmic event in the distant universe. This ground-breaking discovery marks the beginning of a new and grand revolution in astronomy. Whereas light waves have provided a picture of the Universe back to 400,000 years after the Big Bang, gravitational waves can give us information all the way back to a minute fraction of a second after the Big Bang. 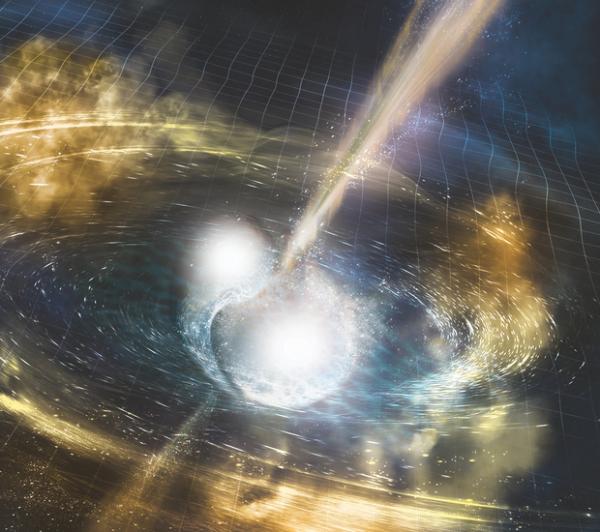 Cataclysmic Collision: Artist’s illustration of two merging neutron stars. The rippling space-time grid represents gravitational waves that travel out from the collision, while the narrow beams show the bursts of gamma rays that are shot out just seconds after the gravitational waves. Swirling clouds of material ejected from the merging stars are also depicted. The clouds glow with visible and other wavelengths of light (CREDIT - NSF_LIGO_Sonoma_State_University_A._Simonnet).