Home What we do Our medals and awards Medals and Awards News 2014 Hector Medal: Maximum symmetry and open questions

Distinguished Professor Marston Conder FRSNZ has been awarded the Hector medal for his outstanding contribution to mathematics.

His main interest is in group theory and its applications, especially to the study of symmetry. He is considered a world authority on discrete objects with maximum possible symmetry in their class. In mathematics, ‘symmetry’ describes how an object’s properties stay the same under transformation – for example, rotating or reflecting a pentagon doesn’t change its appearance.

He is also renowned for pioneering the application of an array of algebraic, combinatorial and computational techniques to find answers to open questions in a wide range of fields.

He is a Distinguished Professor at the University of Auckland, and former co‐director of the New Zealand Institute of Mathematics and Applications. 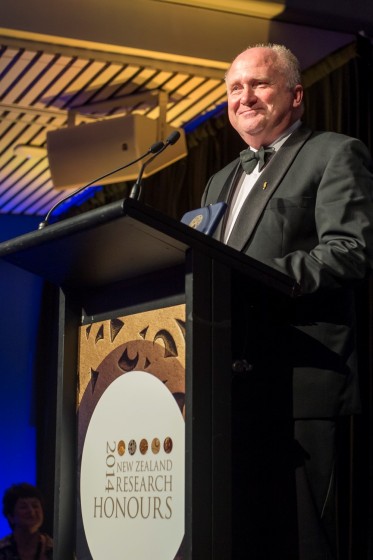 The medal selection panel noted that over the last 30 years, Professor Conder’s leadership and service in the New Zealand mathematical sciences community have been exemplary.

He said he is delighted to receive this recognition from the Royal Society of New Zealand, especially for simply doing something he enjoys so much.

For work of great scientific and technical merit in mathematical and information sciences.

To Marston Conder for his outstanding contributions to mathematics both internationally and locally, particularly in the construction and analysis of discrete objects with maximum symmetry under given conditions.