Home What we do Our medals and awards Medals and Awards News 2014 Jones Medal: A lifetime of statistics

2014 Jones Medal: A lifetime of statistics

Emeritus Professor David Vere‐Jones FRSNZ has been awarded the Jones Medal to recognise his lifetime achievement in statistics, both for his revolutionary research on modelling earthquakes and his teaching of statistics and mathematics in New Zealand.

“During his long and distinguished career, he has made outstanding and fundamental research contributions in probability, statistics and the mathematical sciences in general,” said the medal selection panel.

Sometimes called by his Chinese colleagues ‘The Grandfather of Statistical Seismology,’ Professor Vere‐Jones is best known for his work on forecasting earthquakes and earthquake risks. He pioneered the application of statistical ‘point processes’ theory to seismology. Point processes theory describe events that occur at discrete points in time or space, such as earthquakes, neuron firings and volcanic eruptions.

He received the International Journal of Forecasting Prize in 1997 for the best article in the preceding five years for his 1995 paper “Forecasting earthquakes and earthquake risk.”

He has also worked on Markov Processes, including branching processing and queuing theory. 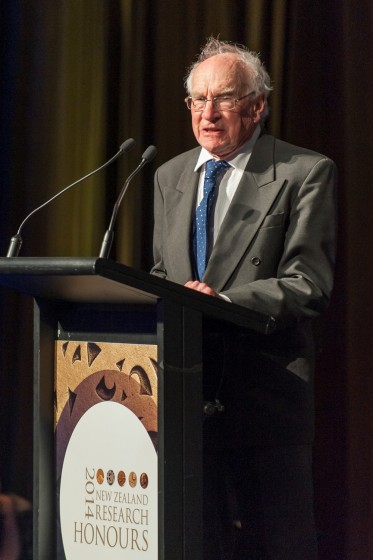 In addition to his research output, Emeritus Professor Vere‐Jones has made substantial contributions to mathematical and statistical education in New Zealand.

In 1995 he was awarded the International Statistical Institute Henri Willem Methorst Medal, and in 1999 he received the Rutherford Medal from the Royal Society of New Zealand.

To recognise lifetime achievement in mathematics or statistics.

To David Vere‐Jones, for his major contributions to the theory of statistics, its applications, and to the teaching of statistics in New Zealand.