Home What we do Our medals and awards Medals and Awards News 2014 Rutherford Medal: Understanding the fundamentals

Distinguished Professor Peter Schwerdtfeger FRSNZ has been awarded the Royal Society of New Zealand’s Rutherford Medal, its highest honour, for his world‐leading contributions to fundamental aspects of chemical and physical phenomena in atoms, molecules and condensed matter.

“His research has provided a deep insight into how atoms and molecules interact at the quantum level.”

As one recent example, in 2013 he solved the long‐standing problem of why mercury is the only metallic element liquid at room temperature. Through calculations and computational simulations, he showed that this is due to Einstein’s special relativity. Without this effect, the melting point of mercury would be around +80°C not ‐39°C as observed.

The selection panel noted that many of his papers have been revolutionary. Some of his papers were rejected initially by journals because the referees did not believe the results. They are now his most cited papers. Last year four of his research papers were selected for the cover of international journals and a further one has received this honour this year.

Distinguished Professor Schwerdtfeger said he was overwhelmed and deeply honoured to be receiving the Rutherford Medal, even more so as it is named after physicist Sir Ernest Rutherford.  “I have always admired Rutherford’s work. For me he is a true giant of science.

“I am in excellent company looking at the names of all the previous Rutherford Medal winners,” he said. 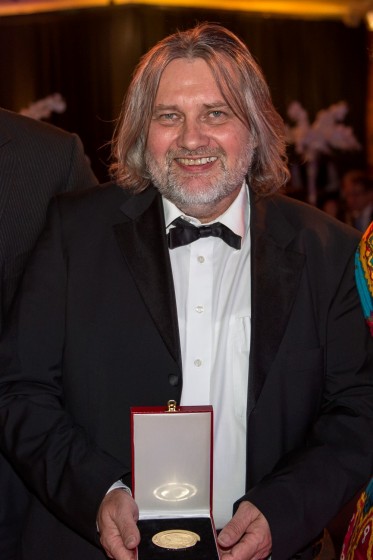 His approach is interdisciplinary, ranging from theoretical chemistry and physics to computer science and mathematics. His research interests include chemical evolution theory, why biomolecules prefer one‐handedness (known as homochirality) and the structure and properties of superheavy elements. He designed a computer program to construct fullerene structures (which are comprised of carbon atoms and form hollow ball or cylinder shapes).

Distinguished Professor Schwerdtfeger is Director of the Centre for Theoretical Chemistry and Physics (CTCP) at the New Zealand Institute for Advanced Study at Massey University, Auckland and he is a strong advocate for a greater role for fundamental research in New Zealand universities. “Many important developments of benefit to our society – including the development of lasers, treatments against illnesses such as cancer, or the World Wide Web – have emerged from fundamental science. It will be fundamental research which helps us to solve the many great challenges human beings face on our planet. If you focus solely on the commercial side without investing in fundamental science you may get neither of them,” Distinguished Professor Schwerdtfeger said.

He was born in Stuttgart (Germany) and took his first degree in Chemical Engineering at Aalen University at the age of 20. He then moved to Stuttgart University to study both chemistry and mathematics and received his PhD in theoretical chemistry in 1986 under the supervision of Heinz‐Werner Preuss, a former group leader in the Max-Panck Institute headed by Nobel Prize winner Werner Heisenberg. He was employed as a taxi-driver for seven years whilst studying mathematics, taught chemistry and physics at intermediate schools, and held a permanent position as a software analyst at Stuttgart University before he received the Feodor-Lynen Fellowship of the Alexander von Humboldt Foundation in 1987 to undertake research at the University of Auckland.

He has received many prestigious grants, awards and prizes. These include international awards such as the Alexander von Humboldt Research Prize in 2011, the Fukui medal in 2011 (for his achievements in quantum chemistry, in particular for his deeper understanding of quantum relativistic effects), an elected fellowship into the International Academy of Quantum Molecular Sciences in 2012 (the membership into IAQMS is currently restricted to about 100 scientists world-wide including a number of Nobel Prize winners), as well as several national research awards and recognitions including Fellowship of the Royal Society of New Zealand in 1997, a James Cook Fellowship in 2001, the Hector Medal in 2001, the SGS Research Prize in Chemistry in 1994 (for excellence in basic research). He was made a Distinguished Professor at Massey University in 2012.

For an exceptional contribution to the advancement and promotion of knowledge in science and technology. This medal is the highest honour awarded by the Royal Society of New Zealand and acknowledges a lifetime of significant scholarly research and the promotion of this knowledge to the benefit of New Zealand society.

To Peter Schwerdtfeger for his world‐leading contributions to fundamental aspects of chemical and physical phenomena in atoms, molecules and condensed matter.