Home What we do Our medals and awards Medals and Awards News 2014 Thomson Medal: Environmental science leadership

Dr Rob Murdoch has been awarded the Thomson medal for his contribution to the development of environmental science in New Zealand.

The medal selection panel noted his inspirational leadership and said he has made a major contribution to the development and application of science to environmental sustainability and wealth generation in New Zealand.

“It has been a privilege and incredibly rewarding to have had a career in science that I believe has made a contribution to the wise use of New Zealand’s marine resources,” Dr Murdoch said.

For more than 20 years Dr Murdoch has held major science leadership roles, from leading the oceanographic research programme at what was the DSIR to his current role as General Manager for Research at the National Institute of Water and Atmospheric Research (NIWA).

In this role he oversees the strategic direction and ensures effective delivery of research on coasts, marine, freshwaters, climate, atmosphere, fisheries and natural hazards. Much of the publically funded research provides information to underpin the sustainable management of New Zealand’s natural resources, while the privately funded research quantifies and characterises New Zealand’s natural resources and how they might be effectively developed for the benefit of New Zealand.

Throughout his career, Dr Murdoch has been dedicated to retaining New Zealand’s offshore research vessel capability, which allows environmental monitoring and oceanic research to be carried out. 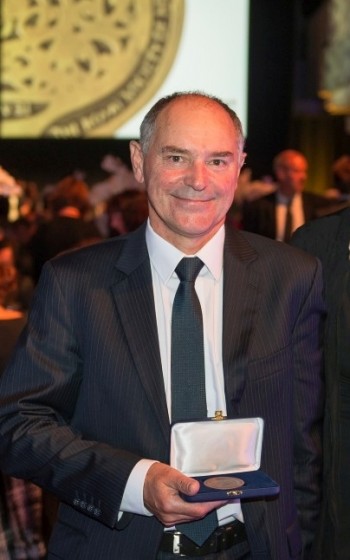 He is also dedicated to staff mentoring and sharing his knowledge with the public.

Early in his career, he was involved in hoki biology when it was still an emerging fishery. It is now one of New Zealand’s most valuable fisheries.

He is co‐director of the NIWA‐University of Otago Centre for Chemical and Physical Oceanography which received the Prime Minister’s Science Prize in 2011 and the University of Otago’s Research Group Award in 2012.

For an outstanding contribution to the organisation, support, and application of science and/or technology.

To Rob Murdoch for his major contribution to the development and application of science to environmental sustainability and wealth generation in New Zealand.