Home What we do Our medals and awards Medals and Awards News 2015 MacDiarmid Medal:What's your stroke risk?

Professor Valery Feigin has been awarded the MacDiarmid Medal for his research into understanding stroke epidemiology worldwide and the development of a mobile app that can help people assess their stroke risk, soon to be translated into 20 languages. 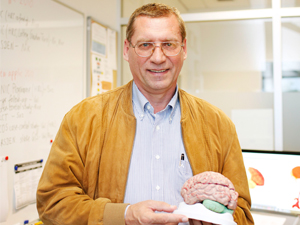 Motivated into this field of research following the death of his father to stroke 35 years ago, Professor Feigin was the first in the world to provide robust evidence that stroke incidence in developed countries is declining but increasing in developing countries over recent years.

His four landmark Lancet papers (2012-2014) revealed that, although age-standardised stroke mortality rates have declined worldwide over the last two decades, the absolute number of people suffering a stroke per year, stroke survivors, and stroke-related deaths and disabilities are all increasing.

“His research is of critical importance for evidence-based health care planning for stroke, and has significantly influenced the current understanding of stroke epidemiology and prevention world-wide,” the medal selection panel said.

Professor Feigin is also the inventor of the unique not-for-profit Stroke Riskometer app, endorsed by the World Stroke Organization and launched by Auckland University of Technology (AUT) in November 2013 for free download via the App Store and Google Play. It is already used in over 70 countries and in 2014 senior doctors voted it the top app in the medical conditions category among the 100,000+ health-related apps available worldwide.

By allowing anyone aged 20 and over to identify their risk factors and estimate their risk of having a stroke within the next 5 to 10 years, this technology has been acclaimed by the International Journal of Stoke (2014; 9:624-626) as representing a new paradigm in primary stroke prevention with the potential to save millions of lives around the world.

The app is being translated into 20 of the most commonly spoken languages, spoken by almost 6 billion people worldwide, and will also be used as a research tool in potentially the largest series of epidemiological studies and clinical trials on non-communicable disease prevention in the world, spanning stroke, dementia, heart attack and diabetes. Over 300 stroke experts from about 160 countries are going to be involved in this global project.

Professor Feigin is hopeful that the app will have a large global impact. “With almost 2 billion smartphone users in the world, and the number increasing every year, the potential of the app to reduce the burden of stroke and other diseases such as stroke, dementia, heart attack and diabetes while, at the same time, increasing our scientific knowledge of these diseases is simply enormous.”

“I would like to thank the Royal Society of New Zealand for their recognition of my work in both stroke epidemiology and development of the Stroke Riskometer app.

“I also thank my team at AUT and my colleagues at other universities around the world, who have given such great support to my work over the years and have assisted me in addressing the devastating impact of stroke.”

Professor Feigin is Director of the National Institute for Stroke & Applied Neurosciences at AUT. He has been made an Honorary Professor at the University of Washington, USA and Novosibirsk State Medical University, Russia. He was awarded the prestigious World Stroke Organization President’s Award in October 2014.

Citation:
To Valery Lvovitch Feigin for outstanding research in stroke epidemiology and prevention worldwide, and the development of ground-breaking technology in primary stroke prevention.