Home What we do Our medals and awards Medals and Awards News 2015 Mason Durie Medal:Perception of illness matters and Nocebo Effect

The Mason Durie Medal has been awarded to Professor Keith Petrie FRSNZ for his research into patients’ perceptions of illness and how these perceptions impact on recovery and coping. 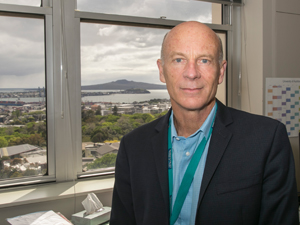 Professor Petrie has found how patients think about illness and their emotions impacts on recovery and immune function in a range of different diseases.

The medal selection panel noted that Professor Petrie is internationally acclaimed for his research, which crosses the boundaries of health, medicine and psychology, and has brought the importance of patient perspectives more to the forefront in clinical medicine.

In 1996 with Professor John Weinman, he developed the Illness Perception Questionnaire (IPQ) that measures how patients mentally represent their illness and associated symptoms. The IPQ and later revisions of the scale have now been cited over 3,000 times.

Professor Petrie went on to demonstrate how patients’ perceptions of a heart attack predicted recovery and return to work better than medical indicators of illness severity.

His research on how expression or suppression of emotions influences immune function has also been widely recognised. One early study showed an improved immune response to a hepatitis B vaccination following an emotional expression intervention, and he later demonstrated short-term immunological effects of thought suppression. Another study showed that an emotional-expression intervention improved immunity cell counts and lowered viral load in HIV positive patients, with later application to other patient groups.

His recent research interests have been on how the public sees health risks from modern life, what he has termed “modern health worries” and how positive and negative expectations can influence drug effectiveness and side effects.

Noticing that wind energy projects in several countries had stalled due to the purported health effects of turbines, he showed that health complaints are more likely “nocebo effects” than due to the low-frequency sound produced by the turbines. Nocebo effects are the opposite of a placebo effect, where an inert substance or form of therapy creates a negative rather than a beneficial response.

Professor Petrie has also been an advisor to Air New Zealand International Flight Operations for more than 15 years, helping to develop a world-leading fatigue management programme for pilots.  This fatigue work, as well improving airline rostering, has also led to a number of influential scientific studies on aircrew fatigue.

Professor Petrie said he was “thrilled” to be awarded the Mason Durie Medal.

“It is of particular significance for me to receive this medal as it is named after one of New Zealand’s most eminent psychiatrists and someone I hold in the greatest respect.

“My honour would not have been achieved without the help of an outstanding and creative group of postgraduate students who have been a key part of my lab for the last 10 years.”

Professor of Health Psychology at the University of Auckland, Professor Petrie was made a Fellow of the Royal Society of New Zealand in October 2015. Other awards have included the Inaugural Distinguished Foreign Scholar Award (2012) from the American Psychological Association Health Psychology Division and a Fulbright Senior Fellowship awarded in 2010, which allowed him to advance his research on the placebo and nocebo effect at Harvard University in the US.

Mason Durie Medal:
To recognise a pre‐eminent New Zealand social scientist whose research has made an international impact.

Citation:
To Keith James Petrie, for his eminent research on patients’ perceptions of illness, how these affect recovery, and how they can be used to improve patients’ health outcomes.