Home What we do Our medals and awards Medals and Awards News 2015 Rutherford Medal: Keeping bones strong

Distinguished Professor Ian Reid FRSNZ has been awarded the Rutherford Medal by the Royal Society of New Zealand for his research to understand and treat metabolic bone diseases, such as osteoporosis and Paget’s disease. 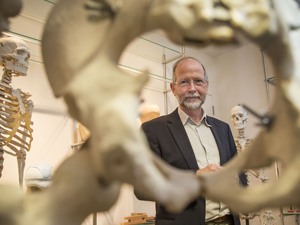 The Rutherford Medal is the highest honour awarded by the Royal Society of New Zealand and acknowledges a lifetime of significant scholarly research and the promotion of this knowledge to the benefit of New Zealand society.

The medal selection panel said Professor Reid has made outstanding contributions to medicine and is internationally acclaimed for his pivotal role in developing the treatments now available for bone diseases.

Professor Reid performed the first successful trial of bisphosphonates, drugs which slow or stop the natural process that dissolves bone tissue, in the 1980s. He addressed the then novel question of whether these agents could be of value for managing osteoporosis, a disease where bones become brittle and fragile. With initial positive responses of increased bone density in patients, he worked with pharmaceutical companies as they improved the drug formulations to be more potent, allowing for the drug to only need to be taken yearly or even once every five years. Today bisphosphonate drugs can result in a 50% reduction in fracture risk in those with osteoporosis.

In addition, Professor Reid has led the development of the use of potent bisphosphonates in Paget’s disease, the debilitating bone condition that has affected up to 7% of older New Zealanders. It’s a chronic disorder that can result in enlarged and misshapen bones. It is caused by excessive breakdown and formation of bone, followed by disorganised bone remodeling.  Treatment with bisphosphonates has proven to be extremely successful in this condition. Less than 1% of patients treated with zoledronate relapse six years after a single infusion. This is now the first-line therapy for Paget’s disease internationally.

Professor Reid has also led seminal studies of the risks and benefits of calcium, vitamin D and other medicines for bone health and has looked at the impact of diseases on bone health, such as HIV.

On receiving the Rutherford Medal, Professor Reid said it was “an enormous accolade” for himself and his research group.

“It brings with it the recognition of other scientists in this country and an acknowledgement of our contribution to scientific advancement in New Zealand. While we have been well acknowledged by bone research organisations internationally, it is especially significant to also receive accolades from the environment that has nurtured and supported us, and received the most direct benefit from our work.

“This also represents an acknowledgement of the importance of clinical research in advancing the welfare of New Zealanders.”

Professor Reid’s recent accolades include the Gluckman Medal (2007), the status of Distinguished Professor (2012) and a Research Excellence Award (2014) from the University of Auckland, Nancy Sirrett Lecturer for the New Zealand Society of Endocrinology (2008) and the Priscilla Kincaid-Smith Orator for the Royal Australasian College of Physicians (2010).

He received the premier clinical research awards from both the American Society for Bone and Mineral Research (the Bartter Award, 2010) and the International Bone and Mineral Society (the Haddad Award, 2011) and the European Calcified Tissue Society’s Research Excellence Award (2015).

He was made a Fellow of the Royal Society of New Zealand in 1997.

For an exceptional contribution to the advancement and promotion of knowledge in science and technology. This medal is the highest honour awarded by the Royal Society of New Zealand and acknowledges a lifetime of significant scholarly research and the promotion of this knowledge to the benefit of New Zealand society.

To Ian Reginald Reid for his seminal contributions to the understanding and treatment of metabolic bone diseases such as osteoporosis and Paget’s Disease.