Home What we do Our medals and awards Medals and Awards News 2016 Hector Medal: Pulses of light that can 'talk' and organise themselves

2016 Hector Medal: Pulses of light that can 'talk' and organise themselves

Associate Professor Stéphane Coen, University of Auckland, has been awarded the Hector medal for his fundamental physics research into optical phenomena in optical fibres and microresonators.

His speciality is temporal cavity solitons, which are pulses of laser light that can self-organise so as to travel indefinitely around a loop.

Associate Professor Coen and co-workers made the first experimental observation of these solitons in 2010, 30 years after they were predicted, using a loop of fibre optic cable, the same type of cable used for broadband internet and other applications.

His further research uncovered the ability of these pulses of laser light to ‘talk’ to each other, interacting via sound waves so weakly that it takes astronomical propagation distances to observe, and also the ability to ‘tweeze’ the pulses, in what’s called ‘temporal tweezing of light’. In the latter, ‘tweezers’ made of laser light themselves can change the temporal separation between the pulses of light. Published in 2015, it was the first time modification of the spacing between two light pulses travelling in a fibre loop has been achieved, enabling on-the-fly reconfigurability of optical data streams without requiring power-hungry, electronic conversion.

“In the future, temporal cavity solitons might allow your cell phone to keep time accurately enough that it could be used as a precise scientific measuring device. You could then use your cell phone as a spectroscope to identify chemicals in the environment,” said Associate Professor Coen. 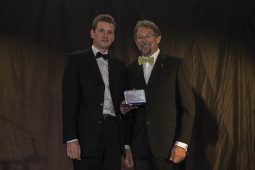 Stephane Coen is presented with the Hector Medal by Gaven Martin

On receiving the medal, he said: “I feel very honoured, especially when I see the impressive list of previous recipients.”

Associate Professor Coen was elected a Fellow of the Optical Society of America in 2015 and was awarded the Research Medal of the New Zealand Association of Scientists in 2015. The University of Auckland awarded him a Research Excellence Award in 2014 and he has received a number of prestigious Marsden Fund grants from the Royal Society of New Zealand.

For work which has made and outstanding contribution to the advancement of physical sciences.

To Stéphane Coen for outstanding contributions in understanding, generation, and manipulation of temporal cavity solitons, and in identifying their role in microresonator Kerr frequency combs.