Home What we do Our medals and awards Medals and Awards News 2016 Hutton Medal: Understanding New Zealand's diverse marine flora

She has been awarded the Hutton Medal by the Royal Society of New Zealand for significantly expanding the knowledge of New Zealand’s seaweeds, also known as marine macroalgae.

In her career, spanning 35 years, she has discovered and documented the diversity of New Zealand flora throughout the region from Te Rangitahua/Kermadec Islands to the Subantarctic Islands and conducted research on taxonomy, evolution, algal ecology, alien seaweeds, seaweed aquaculture and commercial harvesting.

The medal selection committee noted that Professor Nelson’s work has demonstrated the importance of New Zealand in understanding the evolutionary relationships of macroalgae in the world’s oceans and she is highly respected internationally.

Her work on the ancient Bangiales lineage, a type of red algae that includes Japanese nori seaweed, has resulted in New Zealand being recognised as a centre of diversity and requiring a reinterpretation of evolutionary relationships between world species, identification of species that occur only in New Zealand waters and discovery that some of the species reproduce in new ways. 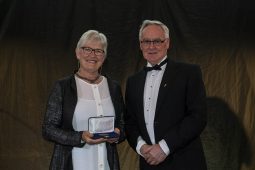 Over the past decade her research has focussed on the ecological importance of coralline algae, a calcified group of red algae, their vulnerability to climate change and the need for better understanding of their taxonomy, diversity and ecology.

From a global perspective, coralline algae form key habitats for a wide range of coastal organisms and are critical to the settlement and development of species such as pāua. She and her colleagues have also discovered a new order of coralline algae.

She has also campaigned hard to get the most aggressive weeds eliminated from our coastal waters.

In 2013 she published popular guide to New Zealand seaweeds, making her extensive knowledge accessible to others.

On being awarded the Hutton Medal, Professor said she had very good fortune to work with exceptional colleagues throughout her career. “I want to acknowledge the great teams I have been part of, particularly in the herbarium at Te Papa, and the biodiversity group at NIWA, and recently joining the University of Auckland.

“New Zealand is an extraordinary place to work as a marine botanist with such diverse marine systems to study, spanning the warm waters of Te Rangitahua/Kermadecs to the cold sub-Antarctic islands. Our long isolation from other land masses and dynamic geological history have all contributed to the evolution of a rich and intriguing marine flora, and there is still a great deal to be discovered.

“Macroalgae are critical to the health and well-being of coastal ecosystems – and it is important to discover and document our flora, understand how coastal systems function – in order to be stewards of coastal environments for future generations.”

Professor Wendy Nelson is Programme Leader for Marine Biological Resources at NIWA and Professor at the School of Biological Sciences at the University of Auckland. She is also Vice-President of the International Phycological Society. She was Curator of Botany at Te Papa for fifteen years. In 2015 she chaired a major review by the Royal Society of New Zealand on biosystematics and taxonomic collections and was a panel member for a review of pest management in 2013-14. She was made a Fellow of the Royal Society of New Zealand in 2010 and made a Member of the New Zealand Order of Merit in 2008. She won the ZONTA Women Scientist Award in 1996, the George Papenfuss Systematics Award at the 7th International Phycological Congress in 2001, the New Zealand Marine Sciences Society Lifetime Achievement Award in 2007, the Allan Mere Award from the New Zealand Botanical Society in 2011, the Provasoli Award from the Phycological Society of America in 2012.

For research which has significantly advanced understanding in plant sciences.

To Wendy Alison Nelson for significant contributions to understanding the diversity, biology and evolution of marine macroalgae