Home What we do Our medals and awards Medals and Awards News 2016 Jones Medal: Statistics for Sampling and Public Health

Emeritus Professor Alastair Scott FRSNZ has been awarded the Jones Medal by the Royal Society of New Zealand for his lifetime contribution to statistics.

The medal selection committee acknowledged that Professor Scott is amongst the very best statisticians New Zealand has produced and he is a world leader in the areas of survey sampling theory and analysis of case control studies.

His methods are applied in a wide range of application areas and he has also contributed substantially to research in public health.

His work has particular relevance to obtaining reliable data from sampling, developing effective and simple methods that can take account of survey design features and deal with missing data.

His 1981 paper on categorical survey data was recognised as one of the 19 landmark papers in survey sampling by the International Association of Survey Statisticians in their 2001 Centenary volume. These methods, developed with Professor Rao, called Rao-Scott adjustments are widely used and incorporated in several software packages for survey data analysis.

In addition to developing a large body of novel and important statistical methodologies, he has been an advisor to official agencies nationally and internationally, including Statistics NZ, The Australian Bureau of Statistics and Statistics Canada. He served as Principal Investigator on the New Zealand Quality of Health Case Study and the National Primary Medical Care Survey. 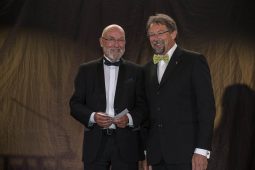 Alastair Scott is presented with the Jones Medal by Gaven Scott

On receiving the Jones Medal, Professor Scott said: “I feel very honoured to receive the Jones Medal named in honour of our most celebrated mathematician, Sir Vaughan Jones.

“This new connection with Vaughan also gives me personal pleasure. The best class I ever taught – my first on returning to New Zealand in 1972 – contained both Vaughan and his great friend Keith Worsley (FRSC), my most successful PhD student.”

Professor Scott was first employed by the University of Auckland in 1972 and was Head of Statistics for eight years. He has continued to work and advise in his retirement. He began his career in the Applied Mathematics Division of DSIR before lecturing at the London School of Economics.  He has been awarded many visiting positions. He is a Fellow of the Royal Society of New Zealand, the American Statistical Association, the Institute of Mathematical Statistics and the Royal Statistical Society. He is an Honorary Life Member of the New Zealand Statistical Association and received its premier award, the Campbell Prize in 2012. In 2006 he received the prestigious Waksberg Award from the American Statistical Association and Statistical Society of Canada for outstanding contributions to survey methodology.

For lifetime achievement in mathematics.

To Alastair John Scott for a career in statistics spanning over 50 years where he contributed through path-breaking research in survey sampling and biostatistics, and through service to the wider statistical profession in academia, government, and society.