New Jones Medal awarded to Professor Emeritus John Butcher from The University of Auckland - for a lifetime of achievement in mathematics.

A new medal for excellence in mathematics was awarded by the Royal Society of New Zealand at their annual research honours celebration in Christchurch on Wednesday night.

The Jones Medal was presented to Professor Emeritus John Butcher FRSNZ of The University of Auckland and recognises his lifetime achievement in mathematics.

It was presented by the scientist it is named after Professor Sir Vaughan Jones, a world-renowned New Zealand mathematician now living in the USA.  The medal was designed by Marian Fountain, a New Zealand sculptor living in France.

Dr Garth Carnaby, president of the Royal Society of New Zealand, said Professor Butcher’s exceptional work on numerical methods for solving differential equations is regarded as some of the best work ever done in this area.

“This work has remained at the forefront of international research for more than 45 years. John Butcher has also been a tremendous leader for developing mathematical sciences in New Zealand.”

Professor Sir Vaughan Jones, after whom the medal is named, also presented Professor Butcher with $5000 in prize money and praised him for his work, saying he owed a ‘personal mathematical debt’ to Butcher.

“I believe we are living in a Golden Age for New Zealand mathematics. There is ample evidence for this. Our disproportionate representation at the International Congress of Mathematics, and a remarkable performance at the Mathematics Olympiad are but two instances. I believe this Golden Age was ushered in by John Butcher."

Professor Butcher’s research has earned him a wide range of top international prizes, including the prestigious Fellowship of the Society for Industrial and Applied Mathematics (the only New Zealander holding this fellowship); the Hector Medal in 1996 from the Royal Society of New Zealand; and the New Zealand Mathematical Society’s Research Award when it was offered for the first time in 1991. 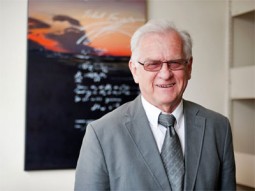 Professor Butcher is regarded as the founder of the modern theory of Runge-Kutta methods, one of the principal classes of numerical methods for solving ordinary differential equations. His methods are used in computer simulations that have become a fundamental scientific tool in computational physics, chemistry, biology and engineering.

In February 2011 he will be presented with the Van Wijngaarden Prize for mathematics. The prize is awarded every five years by the Centrum Wiskunde & Informatica in the Netherlands and is named after the late Adriaan van Wijngaarden, a pioneer in numerical analysis and computer science.

He was the first supervisor of a full time PhD student in mathematics at The University of Auckland and has subsequently supervised many other PhD students, many of whom hold prestigious positions worldwide.

Professor Butcher was a founding member of the New Zealand Mathematical Society, and its second president, and was the first editor of the ‘Mathematical Chronicle’, the journal which later became the ‘NZ Journal of Mathematics’. He was elected as a Fellow of the Royal Society of New Zealand in 1980.