Home What we do Our medals and awards Medals and Awards News 2017 Thomson Medal: Leadership in pest control and aquaculture

Professor Charles Eason CRSNZ has been awarded the Thomson Medal by Royal Society Te Apārangi for outstanding leadership in his research career and for his achievements as head of the Cawthron Institute.

Professor Eason’s science speciality is toxicology, particularly in relation to drugs and natural compounds. He has worked in controversial areas such as chemicals for predator and possum control and fluoridation of water.

Early in his research career Professor Eason worked on the development and commercialisation of three cardiovascular drugs in Europe.

He moved to Landcare Research in 1990 and began development of more than 15 new devices and toxins for targeting mammalian predators. He continues to be involved with the development and commercialisation of pest control tools and systems with low risk to the environment, low toxicity to birds and low secondary poisoning risk.  A more humane toxin, PredaStop® was registered for use against mammalian pests in New Zealand in 2012 and Australia in 2016 – the first such toxin to be registered in more than 30 years.

He is currently involved in the development of new drugs derived from marine algae with European pharmaceutical companies.

Professor Eason has been in leadership roles at the Cawthron Institute since 2003, firstly as a board director and then as Chief Executive and Research Director from 2012, leading more than 200 scientists.

Under his leadership as Chief Executive, new funding has been secured and new buildings and laboratories built, including the world’s largest mussel hatchery, funded by Sanford, which opened in the Cawthron Aquaculture and Research Park in 2015.  These new facilities are allowing Cawthron to build on its expertise in aquaculture breeding, seafood safety, nutraceuticals, and coastal and freshwater ecology.

The medal selection committee said Professor Eason ability to link scientific innovation with commercial experience has had a global impact in the areas of chemical toxicity, pest control, food safety, aquaculture, drug development, and environmental protection. As a leader at Cawthron, they noted his skill in developing and consolidating staff capabilities, infrastructure, and financial viability. 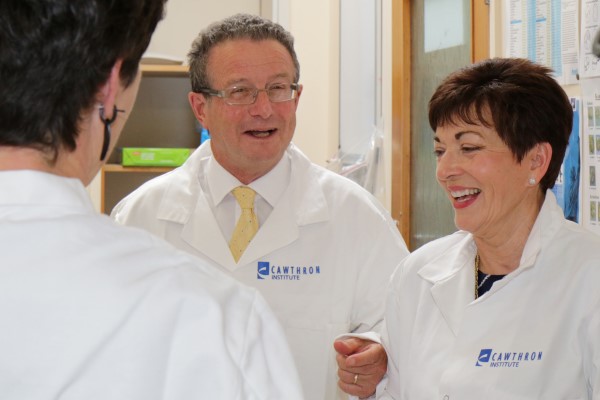 Charles Eason in the lab with Dame Patsy Reddy

Professor Eason said he very much appreciated getting this award and was grateful to the Cawthron Board for deciding to have a practising and publishing scientist as Chief Executive when they appointed him. He is also grateful for the science leadership mentoring he has received.

“I am inspired by down-to-earth researchers that get stuff done. I am proud of the researchers at the Cawthron who have a real vivacity, who can link fundamental research through to real-world outcomes.”

In addition to Professor Eason’s role as Chief Executive of the Cawthron Institute, he maintains a part time role as Professor of Wildlife Biology at Lincoln University (0.2 FTE).  He was selected for the Te Hono Stanford Bootcamp 2016 on accelerating transformation for building a high-value economy and was made a Companion of the Royal Society Te Apārangi in 2016. In 2001 he was awarded an New Zealand Science and Technology Silver Medal for improving vertebrate pest control and in 1994 was the winner of the New Zealand Association of Science Communicator Award.

For outstanding contributions to the organisation, support and application of science or technology in New Zealand.

To Charles Thomas Eason for his inspirational leadership in his research career, particularly in the areas of drug development and pest control, and also as the Chief Executive of the Cawthron Institute, which has had regional and global impact, specialising in food safety, aquaculture and environmental protection