The top award, the Rutherford Medal, was awarded to Professor Rod Downey FRSNZ for his revolutionary research into mathematical logic and computer science. 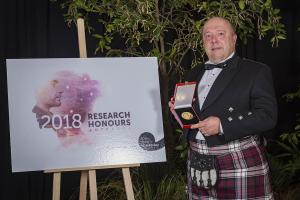 Rod Downey, of Victoria University of Wellington, is an internationally recognised logician known for his research into computability—how can mathematical processes be algorithmically implemented either in theory or practice — and the study of randomness. He was presented the medal by the Governor-General, Her Excellency Dame Patsy Reddy, and receives $100,000 from the government.

Professor Linda Tuhiwai Smith CNZM FRSNZ has received the inaugural Te Puāwaitanga Award from Royal Society Te Apārangi in recognition of the eminent and distinctive contribution she has made to Te Ao Māori, and to Māori and Indigenous knowledge. Based at the University of Waikato and of Ngāti Awa and Ngāti Porou descent, Linda Tuhiwai Smith is a nationally and internationally recognised scholar. Her ground-breaking research in Indigenous methodologies and kaupapa Māori has contributed to the advancement of Māori research, education and society for nearly 40 years. “I am very honoured and humbled that others here and internationally have found my ideas worth engaging with and building upon,” she said. She was presented with a taonga woven by Kohai Grace. (Read more about the Te Puāwaitanga Award winner)

The Health Research Council of New Zealand also introduced a new award, Te Tohu Rapuora, to recognise a significant contribution to Māori health excellence and leadership. The inaugural winner was the Te Kotahi Research Institute of the University of Waikato. Te Kotahi Research Institute has shown leadership and commitment in advancing Māori health research, knowledge, and wellbeing by working closely with iwi, hapu and other Māori health stakeholders. Its research leaders are widely known and respected for their Kaupapa Māori collaborations and for building the capacity and capability of the Māori health research workforce.

The Liley Medal was awarded by the Health Research Council of New Zealand to Professor Cynthia Farquhar, postgraduate professor of Obstetrics and Gynaecology at the University of Auckland and consultant clinician with the Auckland District Health Board. Cynthia Farquhar’sclinical trial into intrauterine insemination published inThe Lancet last year, showed for the first time the very real benefits of this fertility treatment. The study provided conclusive evidence of benefit in a field where less invasive, more successful, and more affordable treatment options are very much needed. Results should influence guidelines for fertility treatment globally and help affected couples make better-informed decisions.

The Health Research Council of New Zealand awarded the Beaven Medal to Dr Colin McArthur, Director of Research in the Department of Critical Care Medicines at the Auckland District Health Board. Colin McArthur has led the New Zealand arm of several multi-centre internationally-recognised trials that have changed guidelines and practices in intensive care units worldwide. He’s shown leadership in his field and created a process where robust, well-powered clinical evidence is helping deliver the best possible outcomes for the critically ill.

The Thomson Medal was awarded by Royal Society Te Apārangi to Professor Emerita Carolyn Burns CBE FRSNZ, University of Otago, for her outstanding leadership and service to environmental science and conservation. In addition to achieving the very highest standards in her academic discipline of lake and wetland ecology, she is recognised for bringing her scientific expertise to serve both the scientific and wider communities at the highest levels and has made a deep and lasting contribution to environmental science and conservation. (Read more about the Thomson Medallist)

Dr Helen Taylor from the University of Otago has been awarded the Callaghan Medal from Royal Society Te Apārangi for her science communication around conservation genetics and threatened species. One of her highly successful initiatives has been ‘The Great Hihi Sperm Race’, where people could place bets on which of the 128 birds had the fastest swimming sperm. This campaign raised more than $11,000 for hihi conservation and drew supporters from 17 countries, spreading the message widely about potential fertility problems for inbred birds. (Read more about the Callaghan Medallist)

Distinguished Professor Marston Conder FRSNZ has been awarded the Jones Medal by Royal Society Te Apārangi for his lifetime achievement and leadership in mathematics. Marston Conder, University of Auckland, is a world authority on the mathematics of symmetry and chirality in discrete structures, especially those with maximum possible symmetry in their class. He is renowned for pioneering an array of algebraic, combinatorial and computational techniques to answer what are called  ‘open’ and ‘challenging’ questions in mathematics. The award also recognises his instrumental role in developing and promoting New Zealand mathematics, which New Zealand-born Fields medallist Sir Vaughan Jones FRS Hon FRSNZ, for whom the medal is named, says has experienced a “renaissance”.  (Read more on the Jones Medallist)

Mathematical physicist Professor Matt Visser FRSNZ has been awarded the Hector Medal by Royal Society Te Apārangi for his research into both classical and quantum gravity, including work on black holes, cosmology and “analogue spacetimes”. Based at the School of Mathematics and Statistics at Victoria University of Wellington, Matt Visser’s research addresses foundational issues in Einstein's general relativity and its interface with quantum physics. (Read more on the Hector Medallist)

Dr Bruce Hayward MNZM FRSNZ has been awarded the Hutton Medal by Royal Society Te Apārangi for his outstanding contributions to the knowledge of New Zealand's marine ecology and geology. He is an internationally-eminent expert on living and fossil foraminifera, which are microscopic marine amoeba that have tiny shells that are abundantly preserved in the fossil record.  He has studied them to learn about past climate conditions, mass extinctions, sea levels and earthquakes. He has also published books for a general reader on geology and volcanoes. (Read more on the Hutton Medallist)

Professor Brett Delahunt ONZM FRSNZ has been awarded the Hercus Medal by Royal Society Te Apārangi for his research on prostate and kidney cancer. Brett Delahunt is an internationally recognised pathologist from the University of Otago, Wellington. His scientific work and insight have been central to the development of an internationally-accepted classification system of important prognostic markers for prostate and renal cancers. (Read more on the Hercus Medallist)

Historian Professor Barbara Brookes MNZM has been awarded the Humanities Aronui Medal by Royal Society Te Apārangi for her outstanding contribution to humanities scholarship. Professor Brookes from the University of Otago is an authority in the history of women, medical history and New Zealand history. She published her award-winning book A History of New Zealand Women in 2016. (Read more on Humanities Aronui Medallist)

Biological anthropologist Professor Lisa Matisoo-Smith FRSNZ has been awarded the Mason Durie Medal by Royal Society Te Apārangi for her ground-breaking work that has, through strong relationships with New Zealand's Indigenous people, reshaped our understanding of the last great human migration into the Pacific. A second focus of her work is to understand the health of ancestral New Zealanders and the biological bases for present-day health inequalities. (Read more on the Mason Durie Medallist)

Dame Dr Claudia Orange DNZM OBE CRSNZ has been awarded the Pou Aronui Award by Royal Society Te Apārangi for her sustained service to the humanities-aronui. Pre-eminent Treaty of Waitangi scholar, Dame Claudia has dedicated much of her distinguished career to, in her words, “taking the Treaty to the people”. She has also been a major force for the Dictionary of New Zealand Biography and is recognised for her leadership at Te Papa Tongarewa as head of collections and research. (Read more on the Pou Aronui Award winner)

Associate Professor Suzanne Pitama (Ngāti Kahungunu, Ngāti Whare) has been awarded the Metge Medal by Royal Society Te Apārangi for her influence on Indigenous health education. Based at the University of Otago, Christchurch, she has made a considerable contribution to inspiring and developing new research capacity and knowledge for health professional education to address critical Indigenous health inequities in Aotearoa. She has designed, developed and evaluated entirely new Māori health models applicable to clinical practice. (Read more on the Metge Medallist)

Distinguished Professor Geoff Chase FRSNZ has been awarded the MacDiarmid Medal by Royal Society Te Apārangi for physiological modelling of human metabolism used for ‘in-silico’ testing. These computer models have been used to treat intensive care patients in New Zealand and overseas, and are being extended to treat type-2 diabetes in other patient groups. His models are estimated to have saved 350 lives and $6-12M at Christchurch Hospital alone over 12 years and are bringing us much closer to the ideal of personalised medicine in an intensive care setting. (Read more about the MacDiarmid Medallist)

A research team from AgResearch led by Dr David Hume has received the Pickering Medal from Royal Society Te Apārangi for work to discover, patent and commercialise a new endophyte for ryegrass. The endophyte provides ryegrass with high levels of protection against insect pests while maintaining the health and productivity of grazing animals, resulting in large gains in farming productivity. It has been estimated that the use of AR37 endophyte in New Zealand has a cumulative value to date of $125 million and will have contributed NZ$3.6 billion to the economy through the life of its patent. (Read more on the Pickering Medallists)

Dr Mohi Rua (Ngai Tūhoe, Ngāti Awa and Ngāti Whakaue), University of Waikato, also received the inaugural Te Kōpūnui Māori Research Award for his innovative research on poverty, homelessness and Māori men's health which is challenging the relevance of mainstream Anglo-American psychology for Maōri and other indigenous peoples.  His research on Māori men challenges pernicious stereotypes and has shown that they see themselves as being carers, nurturers and positive contributors to their communities. (Read more about Te Kōpūnui Māori Research Award winner Mohi Rua)

Associate Professor Maren Wellenreuther, Plant & Food Research, has been awarded the Hamilton Award for her research to develop snapper or trevally as aquaculture-ready species for the seafood sector. She has been using novel tracking and genome methods to achieve this and she is also an advocate for using genome-based methods to preserve biological diversity in the oceans. (Read more about the Hamilton Award winner)

Ms Lettie Roach, a PhD student at NIWA/ Victoria University of Wellington, has been awarded the Hatherton Award for her scientific paper that outlines a new global model for sea ice flow sizes.  This new model takes into account changing floe sizes, both on the surface and the thickness of the floe. It has the potential to make significant improvements to the simulation of polar regions in global climate models. (Read more about the Hatherton Award winner Lettie Roach)

Dr Jurij Volčič, previously based at University of Auckland but now at Texas A&M University, has also been awarded the Hatherton Award for his paper that develops new foundational tools for the emerging mathematical field called free analysis. A branch of algebra, Jurij’s work on noncommutative rational functions has already been used to prove a 50-year-old conjecture in linear algebra and has opened up approaches to overcoming future challenges. (Read more about the Hatherton Award winner Jurij Volčič)

Dr Carwyn Jones (Ngāti Kahungunu), Victoria University of Wellington, has received the Early Career Research Excellence Award for Humanities for his ground-breaking book New Treaty, New Tradition. It reveals new ways of using Indigenous knowledge to understand how law shapes society. Each chapter begins with a dialogue between a Māori father and his son, which gives the reader a personal, living introduction to Māori legal traditions. Overall it demonstrates the continuity between Māori history and contemporary Māori life, and brings home the dynamic vitality of Māori legal traditions in Aotearoa today. (Read more about the Early Career Research Excellence Award for Humanities Award winner)