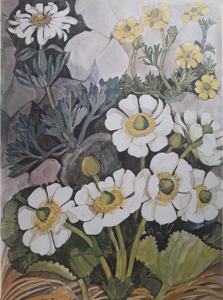 “Right from the time I was very small, I knew somebody did the plant drawings in books. That’s what I wanted to do.”1 Nancy Adams had her chance when she applied for a job at Plant Research Bureau within the Department of Science and Industrial Research at the the tender age of 16. She was asked to name the trees she could see out the window, and when she could, was sent around to the Botany Division. There were many women working there at the time, while men were off fighting during World War II.

Adams soon took over doing the illustrations for the department until she was appointed to the Museum of New Zealand Te Papa Tongarewa in 1959. She became an expert in marine algae, co-authored numerous books, produced an award-winning book on seaweeds and was one of New Zealand’s foremost botanists and botanical artists for more than 50 years.