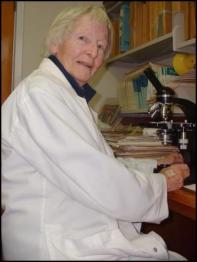 Betty Flint moved to New Zealand as a child then, after graduating from Canterbury College with a MSc on algae, went back to England to study for a PhD during World War II. She was the sole woman working for the Water Board when her boss was asked by the Defence Force for any spare staff. When replied that he had a woman, they said “We’ve never had a woman”. But Flint ended up doing mathematical problems for the Royal Air Force.1

Back in New Zealand, Flint worked for the Department of Scientific and Industrial Research and later Landcare Research.2 She became our foremost researcher on desmids, tiny freshwater algae which – viewed through a microscope – often look like tiny chandeliers. These are often sensitive indicators of pollution and play an important role in our understanding of water quality. Flint remained an active researcher long into retirement and was coauthor on a paper at the age of 101.