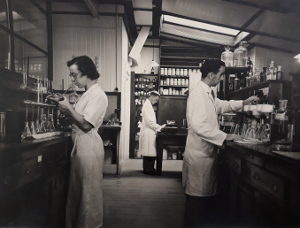 Joyce Watson received her MSc from Canterbury College in 1940 and joined the Cawthron Institute on 4 August 1941, spending her first days cutting up apples to investigate the influence of boron on disorders in fruit.

Watson’s research involved trace element deficiencies across the Nelson region, also looking at deficiencies in hops and the chemical composition of tobacco. One later staff member recalled the wet chemical methods required to determine the nutritional status of tobacco, with a hand-turned desk calculator to work out the numbers.1

One highlight in Watson’s career came with the 1948 rediscovery of takahē in the Murchison Mountains. She analysed the tussock eaten by them for its nutritional value, both to help rear chicks in captivity and to discover whether an application of fertiliser could improve the health of the birds.

Before she retired in 1978, Watson became one of only a few women Fellows of the New Zealand Institute of Chemistry.