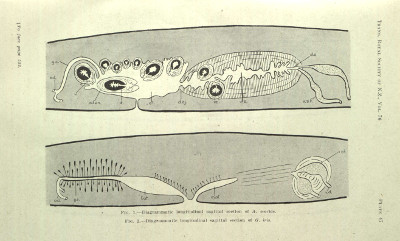 In 1949, Marion Fyfe became the first woman elected onto the Council of the Royal Society Te Apārangi, representing the Otago branch in which she was an active member.1 She became the editor of the Transactions journal, seeking to improve the quality of the papers. Fyfe had in fact already previously helped with the journal, editing proofs in 1938.

Fyfe had studied at the University of Otago, then joined the staff as a lecturer in 1921 and was described as the “backbone” of the department – sometimes acting as department head. When Beryl Brewin joined her in 1936, women accounted for two thirds of the zoology academic staff.2 Fyfe’s work was primarily in flatworms, particularly their reproductive processes, such as the longitudinal sections shown here of Geoplana iris and Artioposthia mariae, a protected species found in Golden Bay and Motueka.