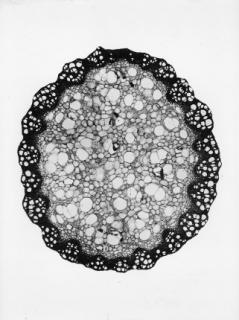 Thelma Kent was first given a box camera in 1914, with which she won a newspaper photographic competition. She used the prize money to buy a better camera, and became determined to make photography her chosen career. Kent won critical acclaim for a photograph of flying gannets, which was published in Photograms of the Year 1939.

Kent had a strong interest in natural history and science, driven in part by work done for the Cawthron Institute and the Canterbury Museum. She borrowed a microscope from Canterbury Museum curator Robert Speight and became proficient at microphotography, photographing small objects with a microscope. One example (right) shows a section of a virginia creeper plant. Kent did similar work for Christchurch Hospital and Canterbury University College. She also took a series showing the life cycle of the monarch butterfly, kept an extensive aviary (including a kiwi for a time) and gave a series of radio lectures on subjects such as “Photographing the Unusual”.1