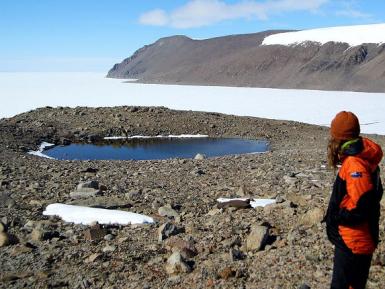 In 1970, when Ann Chapman was the first New Zealand woman to lead a scientific expedition to Antarctica1, one article felt the need to note that the she was unmarried. That same summer an American female scientist was told: “If you fail, there won’t be another woman on the Antarctic Continent for a generation.”2 Chapman herself was nonchalant in an article which appeared in Antarctic.3 “It was surprisingly pleasant to live there,” she said of the field site in the Dry Valleys. Her work studying the frozen lakes would sometimes take until 3am, and she would go for a walk: “The lighting effects in the sky, with the sun so low, were very beautiful.”

Chapman now has a lake near the Granite Harbour in the Ross Dependency named in her honour (right). She had a long career at the University of Waikato, and is perhaps best known for her book An Introduction to the Freshwater Crustacea of New Zealand.