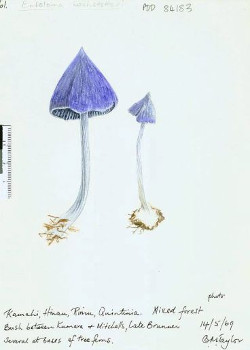 Known for her meticulous and beautiful water colour illustrations of mushrooms and other fungi, Marie Taylor’s biggest impact on the general public was her 1981 book Mushrooms and Toadstools. Published as part of the New Zealand Mobil Nature Guide series the book was reprinted many times, made identification easy, and popularised species such as the blue pinkgill (Marie’s original water colour at right), this mushroom now adorns our fifty dollar note.

Taylor began collecting plants while at high school and studied the life-history of a native flower for her MSc at Victoria University College.1 After a year of teaching high school and an OE, she worked as a lecturer at Victoria – it was here that mycologist Greta Stevenson-Cone suggested Taylor study fungi. This love of fungi grew during a stint living in the South Island and later, working as a senior tutor at Auckland University, Taylor was a committed leader of national fungal forays and often the first port of call for visiting mycologists.2