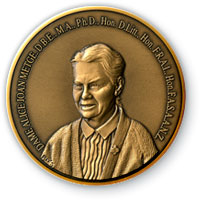 When Joan Metge was 10 her family moved to Pukekohe, where she saw firsthand the exploitation of Māori migrant labourers at the market gardens. At 15 Metge decided she wanted to be an anthropologist, but when she got to university she found the subject was not yet taught. She didn’t begin learning the subject formally until after she had completed her masters degree. However, this wasn’t necessarily a disadvantage. In the 1950s, when Metge began fieldwork with Māori in Auckland city, anthropology was seen as the study of remote tribes, not people moving to cities.1

Metge is best known for her ability to promote cross cultural awareness between Pakeha and Māori, something she has continued to do for over half a century, writing numerous books and articles. In 1987 she was made a Dame Commander of the Order of the British Empire, in 1997 she was awarded the Royal Society Te Apārangi’s inaugural Te Rangi Hiroa Medal and in 2006 the Royal Society Te Apārangi created the Dame Joan Metge Medal in recognition of her contribution to the social sciences.

Image at right: The design of the Dame Joan Metge medal, instituted in 2006 to honour Dame Joan’s contribution to the social sciences.