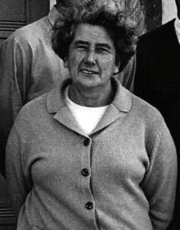 Joan Dingley’s family were keen gardeners but, given her own patch to tend as a child, she instead chose to grow attractive weeds all in a row. Dingley reported that her school reports were “a funny mixture”, with the only consistent comment that she made a good flower monitoress.1

Dingley began her 35 year career at the Department of Scientific and Industrial Research during the Second World War when “male staff were getting short, so the director had to look for a female”.2 Her job required variable tasks, including teaching local police staff how to identify cannabis and opium poppies. Dingley quickly becoming a world authority on Hypocreales, a kind of fungi with brightly coloured spore-producing structures. She started her own research group, went on many solo fungi collecting expeditions, has 30 species and an entire genus named for her, and built the number of specimens in the New Zealand Fungal Herbarium up from 4000 to 35000.