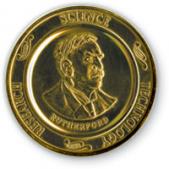 In 2011, Christine Winterbourn became the first woman to win the Royal Society Te Apārangi’s prestigious Rutherford Medal. Women scientists were very much in the minority when Winterbourn began her career – there were four women out of about thirty in her university chemistry class. She believes it is not that surprising that the Rutherford Medal, awarded to more senior researchers, took so long to be won by a woman and said at the time she would be the first of many female recipients (in fact it was won by women in each of the two following years).

Winterbourn has spent most of her career at Otago University’s Christchurch campus and was one of the first scientists to demonstrate that human cells normally produce free radicals, highly reactive molecules which can attack the body. This led to work looking into how free radicals are linked to diseases such as heart disease, cancer and arthritis – work that has established her as a leading world authority in the field.

Image at right: The Rutherford Medal.