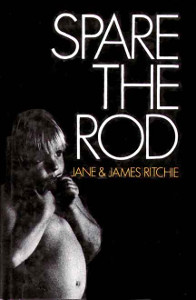 Half of all New Zealand parents smacked their four year olds at least once a week between 1963 to 1997.1 So when Jane Ritchie and her husband James began in the 1970s to call for the repeal of Section 59 of the Crimes Act in the late 1970s, they were going against the tide.

Jane Ritchie had completed a PhD in psychology in 1963 – the first women to do so in that area at a New Zealand university.2 But she didn’t go back into paid employment until 1973, when her eldest daughter was 14. Then Ritchie, often together with her husband, worked patiently for decades; interviewing parents and writing books such as Spare the Rod (right).3 This work spurred international research into family violence, and led to a sea change in New Zealand society. Even before the law was repealed in 2007, parents had stopped using physical force against their children as much, or as often.