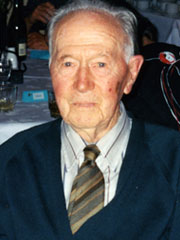 Lindsay Poole was born on 4 March 1908 at Whatatutu (Poverty Bay) and attended school in Rotorua and Auckland. He commenced work in the New Zealand State Forest Service nursery in 1926 as a trainee and in the following year was awarded a scholarship of 100 pounds per year to attend the Auckland University College Forestry School, from which he graduated in 1930 in the midst of the Great Depression. During the next seven years Lindsay was employed as a student labourer in the Forest Service, a nursery manager, a quartermaster in unemployment camps, a deer culler in the Urewera and an ecological surveyor in Westland.

In 1937 there was still no permanent employment available for foresters in the Forest Service and so Lindsay joined the Botany Division of the DSIR where, until the war broke out, he worked on ragwort control and the use of New Zealand flax for woolpacks. In 1940, Lindsay volunteered and was commissioned into the 15th Forestry Company NZE 2nd Echelon in southern England, from which he was posted to the Scientific Liaison Office in London where he remained until the end of the war. Here he tested New Zealand-produced grass and clover pasture seeds, and he worked closely with British scientists and scientists from other Commonwealth countries.

Following the end of the war in Europe, Lindsay joined the forestry and timber section of the military government in the British zone in Germany. He worked alongside the German Forest Service and here saw the amazing range of materials, including food, explosives, clothing and fuel that the Germans obtained from wood.

When Lindsay returned to New Zealand in 1947 he was appointed Assistant Director of the Botany Division of DSIR. He became Director in 1949. During this period at DSIR, Lindsay made a detailed study of the southern beeches and he was responsible in 1958 for an important taxonomic revision of beech species.

After Lindsay retired from the Forest Service in 1971, he was invited to chair the Soil Conservation and Rivers Control Council, a position he held for the next seven years.

During this career of public service, Lindsay was also able to forge a career as a distinguished scientist, sufficient for him to be elected a Fellow of the Royal Society of New Zealand in 1962. He has published 77 scientific papers and seven books, five of these following his retirement from the Forest Service. His first book Trees and Shrubs of New Zealand, written with Nancy Adams, was first published in 1963 and is now in its fifth edition. In 2006, at age 98, he published a book with Hamish Levack and Julian Bateson titled The great wood robbery? Political bumbling ruins New Zealand forestry. Lindsay had a BForSc degree, an MSc (NZ) degree and a Diploma of Horticulture. He received the Queen's Crowning Medal in 1953. In 1970 he received the CBE and in 1977 he received the Silver Jubilee Medal. He was awarded an Associate of Honour of the Royal Institute of Horticulture and he was an Honorary Fellow of the Institute of Chartered Foresters in Britain, a Fellow of the New Zealand Institute of Forestry, and a Life Member of the Commonwealth Forestry Association.

Lindsay Poole had an important connection with the University of Canterbury. He played a large role, probably greater than any other person, in the re-establishment of the School of Forestry at Canterbury in 1970. In 1963 the Treasury became concerned at the drain in overseas funds caused by the long-standing policy of sending New Zealand science graduates to overseas universities with government bursaries to gain professional forestry qualifications. Accordingly, it recommended to the Minister of Forests that he arrange for discussions with New Zealand universities on the economics and feasibility of re-establishing a forestry school in New Zealand (there had been two previously, one each at Auckland and Canterbury, but neither survived the Depression).

Lindsay Poole played golf, and expertly, into his 90s. He was one of the distinguished few who could, over a considerable period of his retirement, complete 18 holes of golf with a score less than his age.