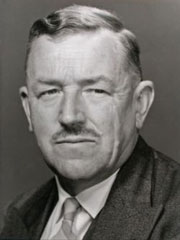 KENNETH RADWAY ALLEN was born in England on 12 February 1911, and studied for bachelor and masters degrees at Cambridge University, and in 1973 was awarded DSc by the university, a recognition of his contribution to fisheries science. He was at first employed by the Freshwater Biological Association at their noted freshwater laboratory at Windermere in the English lakes district, where he undertook studies of the ecology and life histories of freshwater fishes, including "classic" British sporting fishes such as Atlantic salmon, brown trout, perch and pike. While there he met and married Rosa Bullen, daughter of the Director of the Windermere laboratory. They came to New Zealand in 1938, where Allen was employed by the Marine Department, which was, in those days, responsible for management of fisheries in New Zealand, apart from the actual management of angling in fresh waters (by the acclimatisation societies). So, there were some distinct complexities in the research and management protocols and processes into which Allen had to fit, and it would not have been easy. The Marine Department had long had a rather turbulent relationship with the acclimatisation societies, something about which Allen would have had little or no knowledge before coming to New Zealand, though he would have found out, and rapidly. At the time of his arrival in New Zealand, Derisely Hobbs was the senior researcher working on salmonid fishes, and Allen would have had to develop an association with Hobbs who, though essentially untrained, had developed substantial knowledge of New Zealand's trout and salmon fisheries. Allen, it seems, almost immediately set to work to attempt to understand the trout populations in the Horokiwi (now Horokiri) Stream, a small stream that flows into the Pauatahanui Inlet, a little north of Wellington. In essence, Allen was trying to understand energy flow through the trout population, from production of insects that fed on the stream's algae, to the carnivorous insects that fed on these algivorous insects, and so, eventually into the trout populations, for which these insects were prey. The equipment that was available to do this sort of work was, of course, then much more limited than it is now (there were no electric fishing machines) and there are stories of Allen and his wife, wader-clad, dragging seine nets through the pools in the Horokiwi Stream, to provide data on age, growth, and size of the trout stocks there. Also, of course, immense effort was expended in trying to measure the insect stocks in the stream, and their production, and so the source of the food that drove trout growth - essentially an energy balance sheet. It was a large, intensive, demanding and ambitious project, with none of the modern calculators or computers to manage the data (but also few of the sophisticated data analysis techniques that are now commonplace).

Allen's involvement in this work was interrupted during the Second World War. He served in the New Zealand army from 1942 to 1946, before returning to complete his Horokiwi study. This was eventually published, in 1951, and probably for the first time, globally, Allen had managed to provide an explanation for what produced such abundant, large trout in New Zealand's rivers. He found, actually, that there was scarcely enough energy flowing through the food web in the Horokiwi to support the stream's trout population, a question that would later become known as "Allen's paradox" (Huryn 1996). This study certainly placed New Zealand's introduced trout populations on the world map! From there, Allen began to pursue interests in how fish populations are managed, and in this work his statistical/mathematical aptitudes came into play and, in a way, that is what he became known for. He was soon the senior and best trained scientist in the Marine Department's "Fisheries Laboratory" as it was generally known, and became its research director.

I first met Allen when looking for a job, having completed my degree, and recall knocking on Allen's door in the old "converted morgue" at the end of Wingfield St in Thorndon, Wellington, in early 1963. Allen was always a genial, almost jolly man, easy to approach, and I can still see him leaning back in his large chair and can imagine him chuckling to himself "Some young fellow wants a job here!" He had a position available as, not long before, scientist Roger Watson had drowned while on an amphibious plane at Cascade in South Westland. Watson's job was to work on whitebait, and soon his job became mine.

I found that life in the Fisheries Laboratory had its difficulties, especially because so much pressure was exerted on the staff to provide immediate solutions to any problem raised variously by the Minister, his bureaucrats in Marine Department Head Office, various of the acclimatisation societies, as well as those in the Wildlife Service responsible for important trout fisheries in the central North Island and southern lakes. Allen was the conduit for all these often erratic, highly urgent and almost always demanding instructions or requests, and he was struggling to isolate his staff from those pressures, so that we could get on with our agreed research projects. But he had only limited success partly because he was probably too nice. He had plans to divide the research staff into two groups, one of which was responsible for pursuing long-term research goals, and another to deal with these seemingly endless requests for instant simple answers to often major and complex questions. In essence, this would have isolated the more skilled research staff from such influences. Allen had, it seems, limited success in creating this division, or, in fact, Divisions, for he had hopes for a Fisheries Research Division that he would manage, and a Fisheries Management Division that would be responsible more directly to the Head Office bureaucrats.

In the end, the frustrations became more than he could bear, and when an opportunity arose to pursue some research interests on trout and salmon in Canada, Allen left for St Andrews, New Brunswick, in eastern Canada in mid 1964. As so often happens, his career in New Zealand had been sacrificed to provoke changes in the organisation he had left as, before long, the structures he had planned for were instituted, without him.

One of the problems Allen had been examining in the years just before his departure, was the choice of a game fish species suitable for our northern, warm-water lakes that had no sports fish. After overseas travel and consultation, he recommended the introduction of largemouth bass from North America. We can be thankful that it never happened as the likelihood of serious adverse impacts in New Zealand ecosystems, especially on native fish species, was higher than Allen credited, though the largemouth bass was preferred to the smallmouth bass because the later was thought likely to compete with our introduced brown and rainbow trout stocks. He had little interest in the native fish fauna, and the implications of bass for the native species was given little thought by government. With Allen's departure, the highly controversial bass proposal was, thankfully, abandoned.

Allen spent just a few years at St Andrews before shifting west to work at the large and important research station of the Fisheries Research Board of Canada, in Nanaimo, British Columbia, becoming Director. A job of this size left Allen little opportunity for individual research, though he continued to have an interest in fisheries management, and developed a significant reputation as a biometrician skilled in handling the big datasets involved.

In mid 1972 Allen shifted to Cronulla, south of Sydney, New South Wales, where he became Director of the Australian CSIRO Division of Fisheries and Oceanography, a position he held until retirement in 1977. He also became involved in the management of international whale fisheries and was Chairman of the International Whaling Commission's Scientific Committee from 1974 to 1979. After retirement he retained a connection with CSIRO as an honorary research fellow, continuing an active involvement in fisheries management issues well through his 80s, working as a consultant for the International Whaling Commission and the Food and Agriculture Organisation of the United Nations, as well as for Australian fisheries agencies. Through all these years and involvements, it was in particular his skills as a fisheries biometrician and eventually (when computers provided the power that old calculators lacked), fisheries modelling that are significant.

Allen's New Zealand connections following his departure to Canada in the mid 1960s were relatively slight. However, he became internationally famous for the study of the Horokiwi Stream. A few years before he left for Canada, he had employed a young British biologist to undertake a "repeat study" of the stream's trout population. This individual insisted that to do the work effectively, he needed a small field station close to the stream. This reasonable demand was something that Allen was never able to persuade the Marine Department to agree to, and as a result the work was never initiated. It was not until the late 1990s that any kind of replicate study was initiated, and a repeat survey of the Horokiri was done. By this time the stream was defunct as a trout population and there was no opportunity to re-examine the place of invertebrate production in the stream's trout fishery. Biologists involved in this last Horokiri study corresponded with Allen about the stream and he visited it during a trip to New Zealand in 1998. He is co-author of the resulting report, almost certainly his last scientific paper (Jellyman et al. 2000).

Allen was involved in the foundation of the New Zealand Ecological Society, was inaugural President in 1962-63, and presented many papers at Society conferences. He was a Golden member of the American Fisheries Society (meaning that he had been a member for 50 years) and an Honorary Life Member of the Australian Marine Sciences Association and the Australian Society for Fish Biology; the latter society named an award for research excellence after him.

Allen died in Rockdale, New South Wales on 16 February 2008, aged 97 years. He was elected Fellow of the Royal Society in 1961, and so had been a Fellow for 47 years, until his death one of the earliest elected surviving Fellows. His wife Rosa predeceased him in 1995; they had no children.