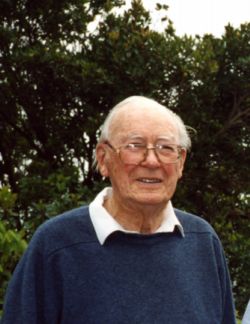 JAMES (JIM) BRODIE is widely respected as a developer and leader in New Zealand marine science. He was part of a generation of scientists that helped shape New Zealand’s research institutions after World War II and set them on the path to full independence and international reputations.

Jim Brodie was born in Bebington, Cheshire on 7 October 1920. He was educated at Napier Boys High School and then attended Victoria University College, completing a MSc in Geology in 1949.

He joined the Department of Lands and Survey in 1937 but then moved to the Department of Scientific and Industrial Research (DSIR) in 1945. Here, he was involved in the post-war establishment of geophysical research in the department that led to the formation of Geophysics Division in 1951 with E. I. Robertson as Director. Jim was appointed as his assistant and had particular responsibility for geophysics and oceanography in the newly formed Geophysical Observatory (which became the Oceanographic Observatory from 1951). During this time he completed his thesis on the Mesozoic marine sedimentary rocks of the Wellington Peninsula.

From 1949, HMNZS Lachlan arrived in New Zealand to commence hydrographic surveys of New Zealand waters. Sea-time became available for marine science so Jim took an active part in setting up the coordinating group, the Interdepartmental Committee on Oceanography and in the formation of the Oceanographic Research Committee of the Council for Scientific and Industrial Research. In 1951, he spent a period on HDMS Galathea, during the Danish world oceanographic expedition and was awarded the Galathea Medal in 1950.

From 1954 to 1958 Jim Brodie was superintendent of the Oceanographic Observatory while it was one of the components of Geophysical Division. Then from 1958 to 1977, he was Director of the New Zealand Oceanographic Institute (NZOI) by now an independent branch of DSIR.

From 1963 to 1967 Jim also shouldered the additional task of acting as Director of Marine and Freshwater Fisheries Research for the Marine Department. As an established leader of scientists he supported change in a small unit ensuring there was appropriate funding, better premises, improved equipment and a sound base from which they could grow under a new Director.

An enduring impression of most staff from those early NZOI days was the family atmosphere. Young people were nurtured into their roles and welcomed to Wellington on what was often their first job. Jim was very particular about staff cohesiveness. Science and support staff were scattered in half a dozen buildings along Thorndon Quay. Therefore, morning and afternoon teas, when all the staff came together, were vital occasions for communication on mutual concerns.

Jim had a delightful habit of entering a scientist’s office unannounced and proceeded to discuss a wide range of science issues. These conversations could last for an hour or more, and when he left, the typical refrain from the scientist was “What was all that about?” Days later, the penny dropped. The Director was seeding ideas about future directions of research which, more often than not, were right to the forefront of modern thinking.

When scientists set up research programmes the vital role that analysis and publication of results play was emphasised by Jim. This culture of communicating with fellow researchers and users of research results exists to this day at NIWA (National Institute of Water and Atmospheric Research), into which NZOI was later incorporated. The NIWA library has also benefitted greatly by his foresight in that the holdings of old expedition reports, some dating back to the 1800s, are a huge asset to research on New Zealand’s flora and fauna.

From 1954 to 1977 Jim’s vision for NZOI led to the establishment of a research institution whose members gained deserved reputations for productive energy, an ability to get the job done, and for significant contributions to science.

Jim’s personal research centred around an interest in Quaternary geology, particular marine aspects. He also published a number of papers that laid foundations in fields such as 14C dating of deep ocean waters, New Zealand’s submarine topography and the passage of icebergs through its waters. One piece of work which is probably cited the most often was the drift-card study of New Zealand coastal and Tasman Sea current systems, begun in 1952 and published in 1960. This work gave the first cohesive picture of near-shore circulation in the New Zealand region.

The practical side of the man came through via his enthusiasm to apply research to practical issues. NZOI used the results from investigations carried out in Cook Strait to guide the deployment of the first submarine power cables between the North and South Islands. NZOI’s extensive bathymetric database, aided by naval hydrographic information, underpinned the establishment of the nation’s Exclusive Economic Zone (EEZ) in the mid 1970s. Those and many other projects reflected his recognition that the ocean research was funded by the tax payer and accordingly it should be put to best use.

In 1960, Jim Brodie began a long association with the marine science activities of UNESCO. In that year he was appointed a member of their International Advisory Committee on Marine Sciences and in the three following years served on the group which met to assist Southeast Asian countries develop their marine science capabilities. In 1966, he spent three months in Paris evaluating the results of UNESCO’s training and education programme in oceanography for developing countries. Then from 1972 to 1979 Jim spent periods as a UNESCO consultant in marine science in Indonesia, attached to the Indonesian Institute of Marine Sciences in Jakarta, where his task was to advance the training of staff through UNESCO scholarships and courses, and to help with the definition of their research programmes. In 1978 he was, for a year, Marine Science Adviser for Southeast Asia based in Jakarta, but with a wider brief that included work with institutions in South Korea, Thailand, Philippines, Singapore and Japan as well as Indonesia.

From 1960, Jim served at intervals on the Council of the Royal Society of New Zealand: he was Honorary Librarian from 1965 to 1978, Home Secretary from 1983 to 1987 and Vice-President from 1986 to 1989. He was made a Fellow of the Royal Society of New Zealand in 1974. In 1985, the Marine Sciences Society presented him with their award and honorary life-time membership. In 1978 the New Zealand Association of Scientists awarded him the Marsden Medal. He was awarded an OBE in 1984.

After his retirement, from 1982 to 1992, Jim was a member of the Board of Trustees of the National Art Gallery and National Museum, and Deputy Chairman of the National Museum Council. From 1985 when the idea of a new Museum of New Zealand to reflect the whole culture of the country was first put forward, he served first on the project development team. From 1988 to 1992 he was an active member of the Project Development Board.

Jim had a long involvement with archaeology and local history. His “Terawhiti and Goldfields” was published in 1986; a history of Scots College in 1992 and “Seeking a New Land” – a series of biographies of New Zealand Quakers – published jointly with his wife Audrey in 1993. He contributed to a number of essays to the Dictionary of New Zealand Biography.

Jim was widowed in 1996, when Audrey passed away. He is survived by his two sons James and Philip.

James Brodie set New Zealand oceanographic research in motion. Through his vision and leadership, the fundamental biological, geological and physical frameworks of our vast offshore region were established to form the foundation for the next generation of researchers. It is a remarkable legacy.