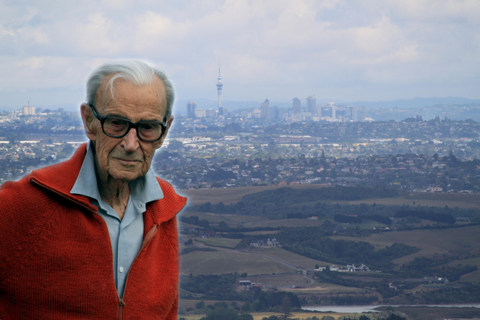 If you’re over 50, and live in New Zealand, there’s a 50% chance you’ll remember watching Kenneth Cumberland front Landmarks, the first major series on TVNZ about the story of our country. If you’re younger, you probably used an edition of the Cumberland atlas or one of his many school resources about aspects of New Zealand and the Pacific at some stage; or if you’re very young, you may have wondered who Jeremy Wells was trying to impersonate on The Unauthorised History of New Zealand.

What you may not know is the man behind the TV screen, or outside the pages of his many publications.

Kenneth Brailey Cumberland, who died at the age of 97 on 17 April 2011, was an academic who became a world leader in geography, a nationally and internationally known writer and speaker on New Zealand’s agriculture and economic future, a civic leader in Auckland, a farmer and a family man. His contribution to New Zealand has been immense, and the flood of emails and letters to his son and daughter in the last few weeks show that he is still widely remembered and respected by people in many different countries as well as within New Zealand.

Kenneth was born in Bradford, Yorkshire, on 1 October 1913. His father Ernest was a book-keeper, and his mother Lucy a dress-maker with experience of working in Germany. No doubt their influence contributed to Kenneth’s on-going interest in money matters, and in German language, in which he became fluent as a teenager. In his memoirs, Kenneth paints a vivid picture of his boyhood in Bradford, of his schooling and his growing passion for sport, especially swimming, his exchange trips as a student to Germany, and of his favourite place, Kettlewell, in the Yorkshire Dales, where his mother’s ancestors had lived for centuries.

Here, on the moors and in the valleys of Upper Wharfedale, often with his younger brother Leslie, in the course of egg and mushroom collecting, grouse-beating, rabbit-snaring, minnow-netting and learning to help with the gathering, branding and dipping of sheep, he began to develop his life-long interest in pastoral farming, as well as his fascination with landscape, geology, and relationships between people and their physical environments. He thought of becoming a farmer.

At Grange Boys’ High School he became an outstanding sportsman, especially in swimming and waterpolo, in which he later represented British Universities in international competition. He also had outstanding teachers of geography and German, and as a result his interest in landscape, farming, and foreign places resulted in scholarship success. After completing his bachelor’s degree at Nottingham University College he was invited to become a junior lecturer in the department of geography at University College, London, where he began work in September 1936, teaching a full timetable as well as studying for his Master’s degree.

Early in 1938 Kenneth was summoned to the office of his head of department, shown a letter from George Jobberns, then establishing geography as a degree subject at Canterbury University College in New Zealand and urgently seeking a lecturer to assist him. Kenneth was offered the position. He hastily finished his thesis and arranged for its printing, booked a passage, and on Saturday 26 March farewelled his parents and special friend Marjorie Denham, and set off for New Zealand, arriving in Christchurch on Friday 13 May 1938.

At the Canterbury University College he worked with George Jobberns to establish and teach a full geography course at the college; and together they persuaded the University of New Zealand to accept geography as an official subject at all levels. In later years, Kenneth said he considered this his most important achievement because at that time few universities anywhere in the world taught geography at all levels for both arts and science degrees.

Kenneth found when he came to New Zealand that there were limited resources about New Zealand itself available here for students of geography, so he wrote the first school atlas and persuaded Whitcombe and Tombs to publish it. As a newcomer to Christchurch, he was also invited to speak to local groups, and soon became a regular contributor to war-time radio programmes on Radio New Zealand.

Kenneth had left England before the war started. However, Marjorie Denham agreed to follow him to New Zealand, after the war had begun, and she arrived in 1940 after a nightmarish 11-week journey from one protected port to another. On 30 November 1940 they were married in Wanganui, in the presence of George and Norah Denham, Marjorie’s brother and sister-in-law, who were living on a farm at Parihauhau.

For their honeymoon they took a camping trip – actually a geography field trip studying erosion! - around the central North Island in a borrowed V-8 Chevrolet coupe. Marjorie even took notes for Kenneth sometimes when he was driving and saw something important.

The field notes from this trip became the basis for Kenneth’s first book, Soil Erosion in New Zealand, published in 1944, which earned him a doctorate in science, and received considerable acclaim in New Zealand and beyond.

Kenneth and Marjorie’s three children were born in Christchurch: Garth in 1942; Sheevaun in 1943; and Tanya in 1945. In January 1946 Kenneth took up the position as Senior Lecturer in Geography at the Auckland University College, where he had been invited to establish a geography department.

As well as initiating the new geography department, teaching, appointing staff and continuing to write resources for the many teachers of geography who were adult students in his courses, during the first few years at Auckland University College Kenneth began to explore the geography of the Pacific Islands in 1947, proposing in 1948 to the university council the establishment of a School of Pacific Area Research in physical and social sciences. Kenneth’s on-going work in the Pacific, with a number of his staff, and the publications which resulted, were a major achievement. So was his founding of the New Zealand Geographical Society and its journal, Geographer.

From 1951 on, Kenneth travelled widely in Europe and North America, to conferences and as a guest professor. He was also head-hunted for two chairs-–at Manchester and Toronto Universities – but his love, by then, for New Zealand, and his and Marjorie's belief that New Zealand was a better place for their children, especially Sheevaun (their middle child, who had Down Syndrome), meant that he refused them both.

From 1952 onwards, he became active in another sphere of influence – local body politics.

Soon after his arrival in Auckland, Kenneth had been invited to join a discussion group initiated by Robbie, later Sir Dove-Meyer Robinson. Robbie’s initial concern was the continued dumping of raw sewage into the Waitemata Harbour. Eventually the group decided that to have better decisions made about environmental and other issues, they would have to participate in Auckland City Council and Auckland Metropolitan Drainage Board political decision-making. So they set up the United Independents Party and in 1953 won sufficient seats on the Auckland City Council to shape a new drainage system which treated sewage before disposal into the Manukau, and also over time to develop a Master Transport Plan which included light rail as well a motorway system.

During these extraordinarily busy years, Marjorie obviously held the family together, accompanied Kenneth on some trips and in many of his other activities, and played an active role in the early years of the IHC. In 1962, however, she had a cerebral haemorrhage, and in June 1963 she died, tragically, aged only 49.

In 1963 the IHC and Masonic Lodge opened a small hostel for IHC clients near Papakura, and Sheevaun became one of its founding residents. And in 1965, Kenneth and Tanya moved to a new home in nearby Brookby, where Kenneth was to live for the next 25 years.

Kenneth continued as head of the geography department at what was by then the University of Auckland. He had decided not to stand for the City Council again in the 1962 elections because of Marjorie’s stroke. But in 1961 he had been elected a Vice-President of the International Geographical Union, so he continued to do a great deal of international travel, spending periods as a visiting professor at a number of American and German universities, and presenting papers at international conferences.

He also became involved in farming, with a special interest in agroforestry and multi-level farming in general. He was frequently invited to talk to farming groups, and to contribute articles to agricultural and marketing journals, particularly as he began to challenge New Zealand’s conventional dependence on dairying and sheep farming, and to advocate multiple land uses and newer crops such as timber trees and subtropical fruit.

In 1973 he became the first geographer to be elected a Fellow of the Royal Society of New Zealand, and in 1974 was invited with a small group of Fellows to Beijing. This was only one of a number of overseas journeys with government and political implications.

Kenneth’s preparation for every speech and broadcast, and his reports on every conference and study experience, were meticulous; his work is well documented in the 35 books, 95 articles in professional journals, 15 articles in books, 14 book reviews, and an estimated thousand or more further speech and radio scripts.

In 1977, Kenneth was approached by young TV producer George Andrews to audition for a New Zealand Television series modelled on Alistair Cook’s America; and in 1978 Kenneth retired from the University of Auckland to begin the most well-known journey of his life, the making of the Landmarks series for Television New Zealand. Half the adult population in 1981 watched one or more of the ten episodes.

For several years after the series was broadcast and repeated in the early 1980s, Kenneth was deluged with requests to speak, write, and run tours as well as writing the book of the series for Readers’ Digest. He was also made a Commander of the Order of the British Empire for his services to education and communication. And he began to write his memoirs (Milestones and Landmarks, published in 2011).

In 1990, he met again a childhood friend from Yorkshire, Rene Wilkinson (nee Badland), and they married in 1991, spending 12 happy years together, first in a new home at Brookby, then in Acacia Cove Retirement Village. Sadly Rene then developed dementia and had to be placed in residential care. Kenneth moved in 2004 to Awhitu to live on the farm of his daughter Tanya and her partner Charmaine Pountney. With his family’s support, Kenneth funded the building of a specially designed house for IHC clients with Down Syndrome requiring additional support as they age. In 2002, a year before the house was completed, Sheevaun died. In 2008, after Rene’s death, Kenneth bought an apartment in Elmwood Village, Manurewa, and spent part of his time there near Garth, while continuing to spend time at Awhitu as well.

Kenneth is survived by his son Garth, now a forestry consultant, and his daughter Tanya, now a grower of organic vegetables and fruit, especially subtropicals. Both are, appropriately, widely known for their innovative and educative approaches to diverse land use. And their sister Sheevaun will be remembered for her loving warmth and humour, as well as for the Franklin IHC house named for her.

Kenneth Brailey Cumberland will be remembered for his warnings on soil erosion and its consequences in New Zealand, his prodigious geographic contribution nationally and internationally, and, of course, for Landmarks. He was, for 70 years of his life, not only a proud Yorkshire man but also a proud New Zealander, for whose life and work we can all be grateful.