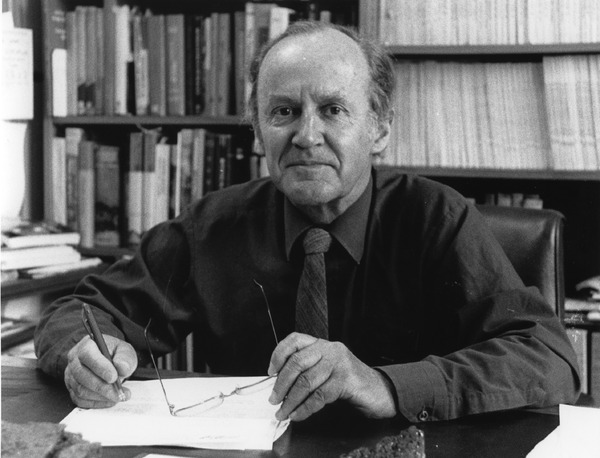 Emeritus Professor Douglas S. Coombs, an eminent New Zealand geologist and a long-serving member of the University of Otago, died in Dunedin on 23 December 2016.

Born in Dunedin on 23 November 1924, Doug attended King’s High School from 1938 to 1942, where he was proxime accessit to dux, and gained a University National Entrance Scholarship. He was a keen sportsman, captaining King’s High School First cricket XI in 1942 as an accomplished right-handed batsman and leg break bowler. He played cricket for Otago against Southland in 1943.

Attending the University of Otago his path to geology was accidental, but he completed the requirements for a BSc, majoring in geology with a strong background in physical science. He was awarded a Senior Scholarship in geology and the Proudfoot Scholarship in Experimental Science. In 1947, having been appointed as Assistant Lecturer, he completed an MSc (University of New Zealand) entitled “The geology of the northern part of the Taringatura survey district” which was awarded First Class Honours in geology. He was a University of Otago Blue from 1947 to 1948, and member of the New Zealand Universities cricket XI in 1948.  In 1948 he was awarded the Sir Julius von Haast Prize and an 1851 Exhibition Scholarship that he held over for study in 1949-1952 at the Department of Mineralogy and Petrology and Emmanuel College at the University of Cambridge, England. The thesis he submitted in 1952 for a PhD was in two parts entitled “I. Incipient metamorphism of tuffs and greywackes of the Taringatura Survey District, Southland, New Zealand” and “II. Studies in the determination of low temperature alkali feldspars”. He was also awarded a Cricketing Blue from Emmanuel College in 1951.

He returned to Dunedin in 1952 as Lecturer in Geology and, following up on his PhD work, collaborated with Dr W. S. (Bill) Fyfe in the Chemistry Department, determining the pressure and temperature of zeolite crystallisation. Doug was promoted to the position of Professor and Head of the Geology Department in 1956, taking over from Professor Noel E. Odell, geologist and famous mountaineer. In the same year, Doug married Anne G. Tarrant, and together they raised two sons, Bernard and Roderick, and daughter Jane.

Doug served in the joint capacities of Professor, and for 34 consecutive years, as Head of Department until his retirement in early 1990.  In the process he built a dynamic Geology Department, establishing with the staff he appointed, and the post-graduate students he attracted, international reputations in many aspects of earth science. Doug led from the front, spending Saturday morning at work in the Department, expecting his staff to be present until midday! In the summer, Doug spent Saturday afternoon playing cricket for one of the University sides, and the rest of the staff were then free to take their leave. He continued to enjoy the annual geology staff versus student cricket matches until late on in his career.

Doug was deeply concerned about the academic status of the Department and vetted all draft research articles that would carry the Department’s address. Those that he deemed inferior he locked in the bottom drawer of his desk, and, since there were no digital copies in those days, there they remained. Staff members who had resigned and left the Department have been known to write and ask for the return of draft research papers!

Doug was renowned for his attention to detail, his keen observation of geological field relationships (including teaching students to analyse excavations from rabbit burrows to determine the nature of underlying rocks!), and his unsurpassed expertise in petrographic microscopy. In this respect he clearly inherited the skills of his father, Leslie D. Coombs, a city architect and a keen amateur microscopist, and was strongly influenced by Dr F. J. (Frank) Turner and Professor W. N. Benson.

Doug is particularly well known for his contribution to mineralogy and petrology (the study of minerals and rocks), and the application of these studies to the plate tectonic evolution of Zealandia. He developed a national and international reputation for excellence in geological science, publishing over 100 refereed research papers and about 40 lesser articles and reports on a broad range of geological topics. His most cited papers are in the fields of low grade metamorphism where pioneering work at Taringatura in the Southland Syncline and a subsequent regional study of the Torlesse greywackes in Canterbury established that metamorphism (the recrystallisation and physical change of parental rocks in response to increase in temperature and pressure as a function of burial in the Earth’s crust) occurred at much lower temperatures than had previously been recognised internationally. He was able to define two subdivisions of metamorphic rocks, confirming the existence of the lowest temperature zeolite facies, first suggested by Finnish geologist Pentti Eskola, and setting up the previously unrecognised prehnite-pumpellyite facies formed at slightly higher temperature. These New Zealand-based subdivisions were subsequently vindicated by work overseas, and continue to form an integral part of the internationally recognised spectrum of metamorphic change.

One of his other main interests was in basaltic volcanic rocks, particularly, although not exclusively, those of the local Dunedin Volcanic Group. This interest was inherited from Professor W. N. Benson, one of the Geology Department’s previous Heads of Department, and long-serving teacher and mentor during Doug’s undergraduate career. Noel Benson had spent a lifetime at Otago mapping the Dunedin Volcano and Doug, through detailed microscopic observation and geochemical analysis, was able to explain the origin and subsequent evolution of magmas formed during the Dunedin volcano’s six million year long life.

He has served as President of the Geological Society of New Zealand (1958–59), President or Secretary of Geology Sections at ANZAAS conferences in Dunedin (1957), Brisbane (1961) and Auckland (1979), Convenor of the Geology Section at the Pacific Science Congress, Dunedin (1983), Council Member for the International Mineralogical Association (1974–1986) and International Association of Geochemistry and Cosmochemistry (1977–1980), Vice-President of the International Mineralogical Association (1982-1986), Dean of Science at University of Otago (1964–1966), together with sundry other positions on national and international committees. Doug was a foundation member of the Geological Society of New Zealand, and served on the committee from 1957 to 1958. He won the Society’s McKay Hammer award in 1961.

As Professor of Geology he attended and presented lectures at numerous national and international conferences, and visited the Universities of Pennsylvania State, Yale, Toronto, Geneva, California at Santa Barbara, and Kochi Japan, during sabbatical leave entitlements.

Doug’s name is commemorated by the locality Coombs Hills, Antarctica, named by Bernard G. Gunn, Doug’s first PhD student. A fossil ammonoid Kakaria coombsi, a lamellibranch Praegonia coombsi, and ostracod Pellucicistoma coombsi also recognise his contribution to the stratigraphic history of New Zealand. Perhaps his greatest personal satisfaction would have been the naming in 1991 of a new mineral, coombsite, by Teruhiko Sameshima and scientific collaborator and ex-Otago staff member, Yosuke Kawachi. Coombsite is a pale brownish yellow fibrous phyllosilicate (mica-like) mineral from a pink-coloured, 50 cm wide rhodonite-quartz lens in schist from Watsons Beach in South Otago. It has the chemical formula K(Mn2+,Fe2+,Mg)13(Si,Al)18O42(OH)14. Appropriately the coombsite-bearing lens occurs within prehnite-pumpellyite schists, first described in Doug’s earlier pioneer work on low-grade metamorphism. Although clearly honoured and delighted at the naming of a new mineral, Doug was heard to describe it as “…a brown smudge on the surface of an otherwise attractive pink rock”! The mineral has subsequently been described from Kozhaevskoe manganese ore deposit in the South Urals, and from manganese nodules in the Haast Schist atMount Patriarch, northwest Otago, New Zealand.

In addition to his geological pursuits, Doug served as inaugural chairman of the Board of Governors of Kings High School, Dunedin between 1979 and 1988.

Doug’s other interests included fishing (particularly for salmon in the Otago Harbour and off the Peninsula coast), gardening and New Zealand flora in general, music and genealogy. In 2006, he and his wife Anne published the book “Strangers and Pilgrims: the von Tunzelmann Saga”, recounting the history of the von Tunzelmann family, originally from Saaremaa (Oesel) in Estonia. Five brothers and sisters of this family arrived in New Zealand between 1853 and 1862, and Doug is a descendant of that lineage.

Coombs, D.S. 1950. Note on the occurrence of further porphyritic rocks in river gravels of South Canterbury and North Otago. Transactions of the Royal Society of New Zealand 78, 277-279.

Coombs, D.S. 1954. The nature and alteration of some Triassic sediments from Southland, New Zealand. Transactions of the Royal Society of New Zealand 82, 65-109.

Coombs, D.S. 1955. Notes on alkali feldspar, phillipsite and clinopyroxene from Siberia Hill and Mount Dasher. Transactions of the Royal Society of New Zealand 83, 369-372.

Coombs, D.S. 1963. Trends and affinities of basaltic magmas and pyroxenes as illustrated on the diopside-olivine-silica diagram. Mineralogical Society of America Special Paper 1, 227-250.

McDougall, I., Coombs, D.S. 1973. Potassium-argon ages for the Dunedin volcano and outlying volcanics. New Zealand Journal of Geology and Geophysics 16, 179-189.

Coombs, D.S. 1993. Dehydration veins in diagenetic and very‐low‐grade metamorphic rocks: features of the crustal seismogenic zone and their significance to mineral facies. Journal of Metamorphic Geology 11, 389-399.

Coombs, D.S., Roedder, E. 1994. On the significance of CO2 inclusions in plagioclase microphenocrysts in tholeiite from Moeraki, New Zealand. Bulletin of volcanology 56, 23-28.