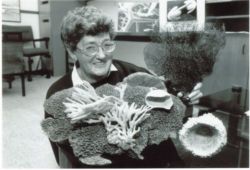 Dame Professor Pat Bergquist was born Patricia Rose Smyth on Auckland’s North Shore on 10 March 1933. Her mother, Bertha, was the homemaker and her father William was an electrician. Pat had a younger brother Norman and a sister Catherine who idolised her from their earliest days and this became even stronger after their mother’s early death leaving Pat the senior woman in the household. It was at this point that their father found support for the household through the Salvation Army. (Pat played the tenor horn in the band and her ‘ties of gratitude’ remained with her all her life). First attending Devonport Primary School, Pat went on to be Dux of Takapuna Grammar School before attending the University of Auckland in 1950. Here she completed her MSc with First Class Honours on the biology of a fern species and a second MSc equivalent in Zoology before going on to obtain her PhD on the taxonomy of the Porifera in 1961. Hers was the first doctoral degree awarded in Zoology at the University of Auckland. In 1958 she married Peter Bergquist and together, following her Doctorate, they studied at Yale University (Pat) and Harvard University (Peter) from 1961 to 1964, where she consolidated her skill and expertise and established herself as an outstanding taxonomist. Pat returned for a further period with Willard Hartman at Yale in 1968-69.

Pat’s particular interest in marine sponges led to a benchmark series of publications, commencing with an overview of the behaviour of intertidal sponges published in the New Zealand Journal of Marine and Freshwater Research in 1967 and continuing with a series of definitive publications on the Demospongiae in the NZ Oceanographic Institute’s memoir series on the Marine Fauna of New Zealand. Her text book “Sponges” published in 1978 remains the only definitive text book in this area and is a prescribed text throughout the world. Pat recognised the need for a stable framework of higher level classification that permitted the recognition of generic relationships and facilitated the description of new species; she played a significant role in establishing this for marine sponges. Pat was one of the first to use chemical attributes for systematic comparisons and classification and was a pioneer in the area of bioactives, being one of the first to recognise the importance and potential of compounds extracted from sponges for the biopharma industry. For more than 30 years she collaborated with the Roche Research Institute for Marine Pharmacology, bringing her combined knowledge of sponge taxonomy worldwide, her knowledge of marine natural product chemistry and of sponge histology and developmental biology to this very successful partnership. Pat was instrumental in setting up the monitoring survey programme for Maui Exploration before the establishment of the Maui oil fields off the New Plymouth coast. Her combined interests in marine biology saw her working across the world including the Mediterranean, New Caledonia, Antarctica, North America, Australia (especially the Barrier Reef) and many offshore islands around New Zealand in addition to our own coastline. She published over 130 peer-reviewed Journal articles.

Pat was an innovative educator and had expertise across a broad range of anatomical, developmental and zoological fields and was an excellent cell biologist. She supervised many postgraduate students in the Department of Zoology at the University of Auckland who remember her fondly as PRB. Research projects covered all fields of biology and she demanded of her students the same high academic standards she set herself. Her success as a supervisor is reflected in the appointment of many of her students to senior positions in universities at home and around the world, in museums, the marine industry and business sector and crown research institutes such as NIWA and the Australian Institute of Marine Science. Many have benefited enormously from her guidance and advice and from her very real support in career development.

Pat was one of Auckland University's first two female Professors and the second woman to receive a Personal Chair in 1981, awarded in Zoology for her contributions to marine sciences. She played key roles in many areas of the university management. Pat was for a long time Assistant Vice-Chancellor (Academic) and served one term as Deputy Vice Chancellor, as well as serving on every vice-chancellor’s committee within the University. At various times she held positions on the University Council, Research Committee, and Finance Committee. As a member of the Appointments Committee and Promotions Advisory Committee she played a critical role in making appointments (including Chairs) across the whole of the University.

Pat was recognised as a world authority on the taxonomy of sponges and was awarded a DSc in 1980 in recognition of her research in sponge biology and biochemistry. She was elected to a Fellowship of the Royal Society of New Zealand in 1982 and was awarded the Hector Medal and Prize of the Royal Society of New Zealand for distinguished contributions to research in 1989 and the New Zealand Marine Sciences Society Prize for distinguished contributions to Marine Biology in 1990. She was also involved in the Hauraki Gulf Maritime Parks Board and was a founding Member of the Board of the Foundation for Research, Science and Technology. She served on the Prime Minister’s Special Committee on Nuclear Propulsion in 1992-23. In 1994 she was on the review panel set up to examine the quality and quantity of research at Te Papa, and their report, An Agenda for Scholarship, went a long way towards meeting the challenges of the future for scholarship and research at Te Papa. In 1993 she was made a Dame Commander of the Order of the British Empire for her contributions to science, both in New Zealand and internationally.

Pat loved her beach house at Coromandel and valued and appreciated family time spent there within the Wyuna Bay community where fishing was a favourite pastime. Her much loved dog also enjoyed the beach where walks and fishing trips aroused much excitement. Together with her husband Peter and daughter Claire, Pat travelled the world, attended the opera and the ballet in both Sydney and Auckland and appreciated very much the high level of performance and talent in the arts both abroad and here in New Zealand and Australia. Many of Pat’s students were introduced to the ballet, opera and good wine and food during the course of their studies. Pat always included her students in her own cultural outings as if this was a natural part of the “training”. She was an accomplished sportswoman and played cricket for Auckland as well as taking up windsurfing in her later years.

Pat was a very strong, intelligent and determined person within New Zealand academia. She had a very dry and quick sense of humour and was always happy to participate in debate and conversation at all levels. But perhaps her greatest tribute is the legacy she leaves to the international marine biology community. Pat will be remembered by her colleagues, past students and friends as an outstanding scientist, and a loyal friend and colleague who contributed so much to her field and to life at the University of Auckland. Pat died on Wednesday, 9 September 2009, after a courageous and long-term battle with breast cancer. Tributes to Pat sent to Peter and Claire, from colleagues and past students, came from all corners of the world. But the greatest tribute is perhaps captured in the words of a PhD student at Dalhousie University, Canada, as this acknowledges Pat’s lifelong love of her work, her commitment and dedication to her chosen field and her contribution to the next generation –

“I have never met you, but your book was instrumental in fostering my fascination with sponges as an undergraduate, and my subsequent PhD work and advocacy to protect deep-water sponges”.

Battershill, C. N.; Bergquist, P. R. 1984: The influence of biorhythms on sensitivity of Nerita to pollutants at sublethal levels. Oil and Petrochemical Pollution 2 (1): 31−38.

Bergquist, P. R. 1980a: The ordinal and subclass classification of the Demospongiae (Porifera); appraisal of the present arrangement an proposal of a new order. New Zealand Journal of Zoology 7: 1−6.

Bergquist, P. R.; Green, C. R. 1977a: A method for preserving larva substrate relationships during preparation for electron microscopy. Biology of the Cell 328 (1): 85−86.

Bergquist, P. R.; Kelly-Borges, M. 1991: An evaluation of the genus Tethya (Porifera: Hadromerida) with descriptions of new species from the South West Pacific. The Beagle. Records of the Northern Territory Museum of Arts and Sciences 8 (1): 37−72.

Green, C. R.; Bergquist, P. R. 1982: Phylogenetic relationships within the invertebrata in relation to the structure of septate junctions and the development of occluding junctional types. Journal of Cell Science 53: 279–305.