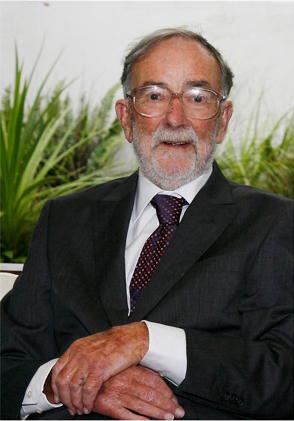 Professor Alister McLellan, though born in Christchurch on 4 June 1919, was brought up as one of seven sons of a Post-Office clerk in Westport, where he went to school - eventually becoming dux of Westport Technical High School. He was fortunate to have had great teachers in Westport and they encouraged him to apply for a scholarship to Nelson College. (His lefthandedness appeared to present an obstacle to a possible career in the Post Office.) He was awarded a scholarship but, while still at school at Westport and aged sixteen, he made a cycle trip down the West Coast with a schoolmate and one of the teachers. From Westport, they rode to Haast and then through Central Otago to Christchurch and then home. According to his son John, Alister never forgot the shock of seeing men working in miserable conditions on Depression schemes.

Alister’s post-graduate studies, however, had to be deferred as he joined the Department of Scientific and Industrial Research to do war work. He took part in the development of infra-red radiation detection and microwave radar systems for the detection of ships and helped to install the detection beams across Wellington Heads. Later he worked on uranium detection, so enabling the first search for uranium to be made in Westland and Stewart Island. While he was pleased with how his apparatus stood up to prospecting in some very rough country, he eventually came to the view that New Zealand could not compete in that costly field of nuclear power.

While the war-time work was essentially of a practical nature, it also called on Alister’s theoretical and mathematical skills and when the opportunity came to take up his post-graduate scholarship he was determined to study theoretical physics.

In 1946 Alister went to Edinburgh to do research in theoretical physics under the renowned Professor Max Born who was one of the key figures in the early development and application of quantum mechanics. To have been accepted as a research student by such an eminent physicist was a clear indication of Alister’s abilities. (Max Born, along with Walter Bothe, was awarded the Nobel Prize in Physics for fundamental work in quantum mechanics in 1954.) One of Professor Born’s interests was the theory of liquids and crystals and it was in this field that Alister worked with Born and was awarded a PhD in 1948 for a dissertation entitled “The radial distribution function and its application to the properties of fluids”.

While on holiday in the Scottish highlands he met a Yorkshire woman, Pam. When Alister returned to Otago as a lecturer in 1949, Pam joined him there at the end of the year and they were married in New Zealand at Westport in 1949. Alister and Pam and their three sons formed a close-knit family with shared interests and a great affection for the West Coast where they had a cottage for a number of years. Alister’s list of recreations included tramping, swimming and music.

Back in Dunedin Alister was promoted in 1953 to Senior Lecturer and in 1955 was awarded the Michaelis Memorial Medal and Prize for research in physics by the University of Otago. He was also awarded the Hector Medal, the Royal Society’s premier research award, and a Nuffield Travelling Fellowship for one year at the University of Cambridge which he spent at the Department of Theoretical Chemistry with Professor Longuet-Higgins.

Before 1962 the various University Colleges were colleges of the University of New Zealand and appointments were made by the New Zealand University Senate. In the Canterbury University College calendar of 1955 the listing for Physics Head of Department is “Appointment pending” The previous HOD, Professor Chalklin, had died in a tragic plane crash in Singapore. The August 1955 Minutes of the Senate and Boards of the University of New Zealand has on page 57, item (10) Appointments to Chairs:-Canterbury, Professor A. G. McLellan. This is duly confirmed by the CUC calendar of 1956 which lists Professor A. G. McLellan as Head of Department.

This must have been an exciting and challenging time to have taken up his position as it coincided with the continuing development of the plans for new buildings and the move to Ilam. A new Vice-Chancellor, Dr F. J. Llewellyn, arrived in 1957 and played a very active role overseeing this development. From 1958 to 1960 Alister was Dean of the Faculty of Science and found life very busy with faculty attendance at meetings verging on 100% as the various departments sought to have their views heard and acknowledged on the size, location and design of their proposed new buildings. This period also saw the introduction of the BSc (Hons) programme. Then, at the end of 1959, the Hughes Parry report led to the complete autonomy of the University Council from 1 January 1962 and the transition of Canterbury University College to the University of Canterbury, with Dr Llewellyn leaving to become chairman of the new University Grants Committee.

Alister recognised that experimental work lay at the heart of a physics department and encouraged the development of solid state spectroscopy and of the other main activity of the department – atmospheric physics. In the last few years in the city site new apparatus was being installed or planned for the new Ilam site and particular importance was attached to the transfer of the department workshops from the cramped basement to the much more spacious facilities with new machinery and electronic capabilities under construction at Ilam. Alister was always conscious of the contributions of the craftsmen technicians in the design, construction and maintenance of the experimental equipment necessary for the progress of research and teaching in the Department.

Another development which greatly pleased him was the introduction of teaching and research in astronomy and astrophysics. The University of Pennsylvania had been looking for a suitable site for a Southern Hemisphere Observatory and the University of Canterbury offered assistance in site testing. After the Mt John site was chosen, the University of Canterbury, at Alister’s prompting, offered to co-operate in the development and use of the observatory. The Mt John University Observatory was officially opened in 1965 with Professor A. G. McLellan, as HOD Physics, nominated as Director of the Observatory. Since that time the number of academic staff positions filled by astronomers increased significantly and the department became the Department of Physics and Astronomy. Alister’s careful budgeting enabled the purchase of the 0.6 metre Boller and Chivens telescope and its installation at Mt John in 1975. His interest and enthusiasm are commemorated by the planning, construction and eventual installation and equipping of the McLellan 1 metre telescope at Mt. John University Observatory. Much of the high precision work was carried out in the departmental workshops and the installation was made in 1987 after he had retired.

Alister’s own research had been slowed by his responsibilities. As well as Head of Department he had been Dean of Science and acting Vice-Chancellor on two occasions, one of them during Professor Phillips’ illness. As he approached retirement age the University was moving away from appointing Professors as Heads of Department and towards accepting as Head an academic staff member elected by the academic staff of the department in question. In 1983 he retired from the position of HOD and handed the reins over to one of his former students - Professor Brian Wybourne, MSc (1957) and PhD (1960). He then was able to devote time to his own research and to extend his list of publications which included a book published in 1980 in the series of Cambridge Monographs on Physics. He retired in 1985, but always maintained his interest in physics and astronomy and in the activities of his former Department. A prize in his name - The McLellan Prize in Physics - was instituted in the University of Canterbury in 1985.

The Physics and Astronomy Department has a considerable collection of MSc and PhD theses, several of which had been supervised by Professor McLellan, and of particular interest are the acknowledgements. Nearly all thanked Professor McLellan for accepting the student and providing the facilities of the Department, which of course was to be expected for the Head of Department. Many students expressed gratitude for the award of teaching fellowships which supported them during their research, but so many of those acknowledgements went further and several of his students went on to become professors of physics both at the University of Canterbury and elsewhere.

The following is a brief selection of typical comments over a span of 25 years.

1957 - Thanks for much appreciated encouragement and advice.

1960 - Particular thanks are due to Professor A. G. McLellan for helpful discussions.

1960 - It is a pleasure to acknowledge many stimulating and helpful discussions with Professor A. G. McLellan

1965 – Thanks Prof A. G. McLellan for the opportunity to carry out the research and for his continued interest in its progress.

1969 – Particularly grateful to Professor A. G. McLellan for his continued help and support.

1982 – Thanks to Professor A. G. McLellan for encouragement and advice when difficulties were encountered.

One thesis in the collection acknowledged “Alister’s forbearance”.

The many comments are aptly summed up by one of the former students quoted above who has written “Alister will be fondly remembered by the many students whose careers he influenced and by the colleagues who had the privilege of working with him.”

Alister McLellan is survived by his wife, Pam, three sons and four grandchildren.

McLellan, A.G. 1949: An improved radial distribution function and equation of state. New Zealand Journal of Science and Technology Section B 31: 42-44.

McLellan, A. G. 1952: A new method of solving the Born-Green equation for the radial distribution function. Proceedings of the Royal Society of London Series A-Mathematical and Physical Sciences 210: 509-517.

McLellan, A. G. 1953: The stress tensor, surface tension and viscosity. Proceedings of the Royal Society of London Series A-Mathematical and Physical Sciences 217: 92-96.

McLellan, A. G. 1960: Selection rules for spin-orbit matrix elements for the configuration fn. Proceedings of the Physical Society of London 76: 419-422.

McLellan, A. G. 1961: Eigenfunctions for integer and half-odd integer values of J symmetrized according to the icosahedral group and group C3v. Journal of Chemical Physics 34: 1350-1359.

McLellan, A. G. 1964: Application of the hole theory of Baer to a one-dimensional fluid of hard spheres. Journal of Chemical Physics 40: 2069.

McLellan, A. G. 1968: The chemical potential in thermodynamic systems under non-hydrostatic stresses. Proceedings of the Royal Society of London Series A-Mathematical and Physical Sciences 307: 1-13.

McLellan, A. G. 1970: Non-hydrostatic thermodynamics of chemical systems. Proceedings of the Royal Society of London Series A-Mathematical and Physical Sciences 314: 443-455.

McLellan, A. G. 1972: The classical limit of the partition-function in statistical mechanics. American Journal of Physics 40: 704-709.

McLellan, A. G. 1974: Invariant functions and homogeneous bases of irreducible representations of crystal point groups, with applications to thermodynamic properties of crystals under strain. Journal of Physics C-Solid State Physics 7: 3326-3340.

McLellan, A. G. 1978: The thermodynamic theory of the growth of Dauphiné twinning in quartz under stress. Journal of Physics C-Solid State Physics 11: 4665-4679.

McLellan, A. G. 1979: Thermodynamic relations at solid-state phase-transitions and an application to potassium hexachlororhenate. Journal of Physics C-Solid State Physics 12: 5411-5417.

McLellan, A. G. 1984: An exact quantum statistical formulation of the elastic-constants of a solid. Journal of Physics C-Solid State Physics 17: 1-12.

McLellan, A. G. 1984: The internal strain of a crystal-lattice and its contributions to the elastic-constants and piezoelectric coefficients. Journal of Physics C-Solid State Physics 17: 2999-3007.

McLellan, A. G. 1985: The quantum-theory of crystal deformation: the harmonic approximation and rotational invariance. Journal of Physics C-Solid State Physics 18: 5511-5530.

McLellan, A. G. 1988: Angular-momentum states for phonons and a rotationally invariant development of lattice-dynamics. Journal of Physics C-Solid State Physics 21: 1177-1190.

McLellan, A. G. 1993: The cyclic boundary-conditions and crystal vibrations. Proceedings of the Royal Society of London Series A-Mathematical Physical and Engineering Sciences 442: 373-395.