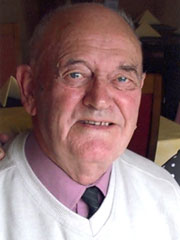 DEREK LAWDEN was born in Birmingham, UK, on 15th September 1919 and died in Warwick, UK, on 15th February 2008. He attended King Edward VI Grammar School, Aston and won a scholarship to Cambridge to study Mathematics. He graduated in 1947 as a Wrangler in the Tripos examinations. He served as a captain in the Royal Artillery from 1939 until 1946, for a time being in charge of coast artillery radar at Gibraltar. After leaving the army he was appointed a lecturer in mathematics at the Royal Military College of Science, researching in control systems. Later, he moved to the College of Advanced Technology Birmingham, where he began work on the theory of optimal rocket trajectories.

In 1956 he was appointed Professor of Mathematics at the University of Canterbury, New Zealand. At that time the department had a total staff of just five, including one chair. Appointment to this chair automatically meant being Head of Mathematics, including pure and applied mathematics, and statistics.

Derek's arrival had an immediate and stimulating effect on the department, through his energy and his refreshing ideas on teaching and research. He reformed and modernized the prescriptions of most of the courses. He was keen to foster a commitment to research and was already strongly involved himself, having published several papers on the optimization of rocket trajectories, particularly in applications to interplanetary travel. He made significant contributions in this field, which had become the subject of intense research in the United States, that country having already committed itself to sending a man to the moon. This resulted in appointments as a consultant to such companies as Boeing and Lockheed, which led to several visits to the USA. These contacts were eventually terminated because of his opposition to the war in Vietnam. All this work culminated in a text-book, 'Optimal Trajectories for Space Navigation' published in 1963.

The quality of his research led to several high awards: the Sc.D. degree by Cambridge University (1962), a Fellowship of the Royal Society of New Zealand (1962), the Society's Hector Medal (1964) and the Mechanics and Control of Flight Award of the American Institute of Aeronautics and Astronautics (1967). He was unable to receive the last of these in person, his visa having been cancelled by the US government.

Derek was certainly inclined towards applied mathematics, rather than to the more abstract topics of pure mathematics. This shows in his choice of subject matter for his books. He believed in the importance of establishing a sound, coherent mathematical framework for any applied topic, based on a careful interpretation of known observational facts. However, he was very ready to make use of advanced results from pure mathematics if need be, such as in the field of differential equations.

Socially Derek was a witty, entertaining and provocative conversationalist and public speaker, often expressing an unconventional viewpoint. For example, early in life he espoused the views of the British Interplanetary Society, at a time when these were frequently derided, and he became a member of the New Zealand Rationalist Association.

He enjoyed playing bridge, and his founding of the University bridge club gave a real lift to the social life of the university.

He took up the position of Professor of Mathematical Physics at the University of Aston in Birmingham and was appointed Head of Mathematics in 1977. He retired from this post in 1983 and, after a short spell as a visiting professor at the University of Natal in South Africa, moved to the country, where he wrote a series of books on topics from mathematical physics, several of which have been reprinted as Dover editions.

Apart from mathematics, he had a life-long interest in psychical research, believing that consciousness was the missing link in our scientific understanding of the universe. He had a strong moral sense which, in his early life, drew him towards left-wing idealism. However, he eventually became deeply disillusioned with it because of its toxic practical effects, particularly with what he regarded as the harmful effect of egalitarianism on standards in education. His views on this were influenced by his gratitude for his grammar school education, which he considered had given him his chance in life. Although his views changed, he always expressed them with force and clarity, and scorned the obscurantist, opaque language used in modern academia.

He leaves three sons and a widow.