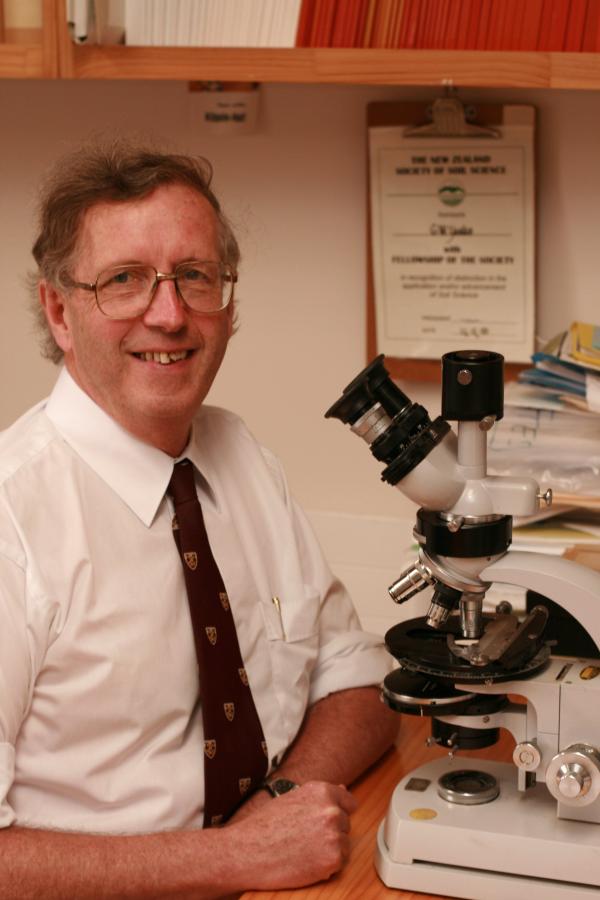 Throughout his career, Gregor dedicated his research to understanding the ecology and sytematics of soil organisms, especially nematodes, primarily in New Zealand but also internationally. He authored over 300 scientific publications, spanning a 45-year period. Gregor also had significant roles in numerous scientific organisations, both nationally – Wellington and Manawatu Branch levels of the Royal Society of New Zealand – and internationally.

Born in New Zealand in 1944, Gregor started his career with a BSc (First Class Honours) in 1966, followed by a PhD in 1968, both completed through the then Department of Zoology at the University of Canterbury, New Zealand. His focus at that time was on characterising and understanding the communities of nematodes in sand dunes. In 1986 he was conferred with a DSc from the University of Canterbury.

Following his PhD, Gregor conducted postdoctoral research at the Rothamsted Experimental Station in England over 1968–1969, and at the Aarhus Museum of Natural History in Denmark from 1969 to 1970, focusing on nematode community ecology, energetics, and production in a Danish beech forest. He returned to New Zealand in 1970 where he remained based, first with the DSIR Soil Bureau in Lower Hutt, then DSIR Division of Land Resources in 1988, and DSIR Land Resources in 1990. He was awarded a Nuffield Foundation Commonwealth Travelling Fellowship to study at Rothamsted in 1977–1978. Following the restructuring of New Zealand Government science institutions in 1992, he worked for Landcare Research, first in Lower Hutt, then, from 1994 until his retirement in 2009, in Palmerston North, the city of his childhood. Following retirement he continued his scientific work as an Honorary Research Associate in the Soil and Earth Science Group, Institute of Natural Resources at Massey University.

During his 39 years with DSIR and Landcare Research, he applied his skills tirelessly to a very broad range of topics and projects, the majority involving the ecology and systematics of soil nematodes, but many also involving other groups of fauna ranging from earthworms to flatworms, porina, grassgrubs, other invertebrates that inhabit the soil, and even to Adelie penguins. He published 292 papers in scientific journals, with a further 9 in press or in preparation at the time of his death. He wrote a number of book chapters, and over 300 other scientific communications (reports, conference papers, abstracts, etc.) and about 40 popular articles for newsletters, newspapers etc. His paper: G. W. Yeates; T. Bongers; R. G. M. De Groede; D. W. Freckman; and S. S. Georgieva (1993): Feeding habits in soil nematode families and genera—An outline for soil ecologists, Journal of Nematology 25(3): 315–331, has been cited over 900 times (Google Scholar).

Gregor contributed significantly to the research on nematode community structures and the influence of environmental and management effects upon them. He studied nematodes and other soil organisms in environments as diverse as Antarctica to Northern Europe, from habitats that included sand dunes, pastures, forests, agricultural fields, and invertebrate intestines. He has had a profound influence on the systematics of nematodes. He named 106 nematode species (81 alone, 25 jointly); with the holotypes of 77 species being deposited in the National Nematode Collection of New Zealand (out of a total of 197 holotypes), as well as helping with several others.

Gregor’s contribution to science, both in New Zealand and abroad, was recognised by a number of honours. He was made a Fellow of the New Zealand Society of Soil Science (NZSSS) in 1995; a Fellow of the Royal Society of New Zealand (RSNZ) in 1998; an Honorary Member of the RSNZ Manawatu Branch in 2004; and a Fellow of the Society of Nematologists (USA) in 2007. One of his collaborators, Dr Brian Boag of the Hutton Institute in Dundee, described Gregor as “the greatest nematologist there has been”. He was also chosen as the NZSSS Norman Taylor Memorial Lecturer for 2006.

Gregor mentored numerous post-graduate students and was an external examiner for masterate and PhD theses. In recent years, he remained active in a number of pursuits that served to communicate science to a broader and younger population. He assisted with an Auckland Bio-Blitz, and, with Professor Vince Neall, authored and co-edited Plains Science 1 on scientific achievements in the Manawatu. Gregor judged at Manawatu Science Fairs and mentored students in both Science Fair and CREST projects. Not long before his death he was assisting Bunnythorpe Primary School with their Science Fair projects, which led to the memorable quote from one of the students: ‘Dr Yeates, you are so COOL’. Gregor was elected to the Committee of The Science Centre Inc in 2004, becoming a strong advocate for local science for school children and the general public. He was Treasurer from 2009 until he died. He was also appointed to The Science Centre Trust in 2005 and became Chair from 2006 until his death, supporting development of science exhibits in Te Manawa, the local museum, science centre and art gallery.

Gregor also played a leading role in his community. He served as an Upper Hutt City Councillor and Hutt Valley Drainage Board member from 1973 to 1977. Continuing his father’s passion for rhododendrons, he served on the Council of the New Zealand Rhododendron Association (1997–2000), as archivist (2000–2012), and was an inaugural Trustee and Friend of the Heritage Park Rhododendron Charitable Trust at Kimbolton.

Gregor will be remembered not only as an extraordinary soil biologist and scientist, but also as a mentor and friend to many. He had an infectious enthusiasm for everything science and soil biology, which inevitably had a lasting impact on those who interacted with him. He is survived by his wife Judy, his sons Peter and Stuart, and their families.

Acknowledgments: Thanks to Judy, Peter, and Stuart Yeates, and David Wardle for providing information on Gregor’s career.