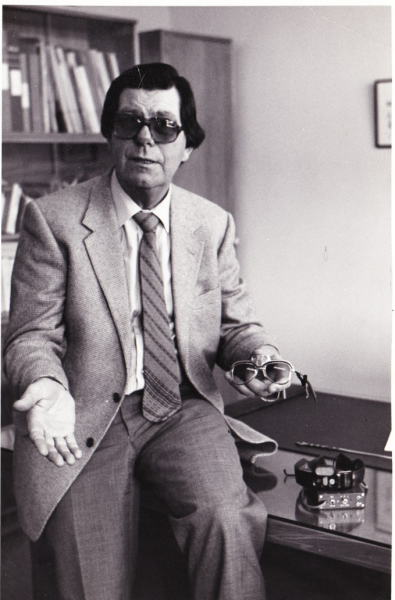 Leslie Kay was born in 1922 to a middleclass mining family in County Durham, England. He struggled with spelling so further education was denied. As a result he left school at 14yrs and enrolled as an apprentice electrician in the colliery managed by his father. He hated being down the coal mine, so he enrolled in night classes and cycled 16miles five nights a week to attain higher qualifications in Electrical Engineering.

When he was 18, in 1940, he enlisted in the Royal Air Force and trained as a pilot.  When they found he had engineering qualifications they posted him to Cornwall as an Aircraft Engineer. His main role was to trouble shoot, as many planes designed in the US were not aerodynamically safe and, when loaded with armaments, often crashed on take-off or landing. He modified the aeroplanes and recalibrated their instruments. He then retrained the pilots as to how to land them safely. He always flew the modified planes to ensure they were airworthy before signing them off for active duty.

On demobilisation from the Air Force in 1946 he enrolled at Durham University and completed a Batchelor of Engineering honours degree in 2 years. He took a job as a Civilian Scientist with the Admiralty based in Portland. He was developing transmitting underwater sonar to identify other submarines and other objects like mines. He was also responsible for identifying incoming torpedoes in order to avoid them; a very dangerous task. It was cutting edge technology. He spent the next 10 years working on land in Portland for six months of the year and then going to sea in a modified diesel submarine for six months, identifying and following Soviet and French submarines in the Mediterranean, the North Sea, the North Atlantic and even into Murmansk Harbour. He was working for the Admiralty but also MI6, so while at sea he was in uniform as a Commander as otherwise if captured he would be shot as a spy. This was at the height of the Cold War and during the Suez Crisis he was waiting off Port Said waiting to identify the Soviet Fleet.

One day while underwater he heard his own signals being transmitted by a Soviet vessel and knew his technology had been stolen. The culprits in his office, a husband and wife team who drafted his plans, were arrested and imprisoned for 20 years. Their spy master, double agent Commander “Buster” Crabb, with whom he shared an office, was eliminated.

Leslie was angry that his technology had been stolen, as was his collaborator in the US Navy, Art Rochon. He decided to enter academia and contacted a friend Prof Roger Tucker at Birmingham University and was offered a job setting up a Department of Electrical Engineering. In 1965 he was awarded a PhD based on his body of published work.

Initially in Birmingham he continued his research in underwater ultrasonic technology but after seeing blind children learning to swim and hitting their heads he started to think about how blind people navigate, and realised they need technology to enable them to navigate safely on land as well. He decided to investigate air sonar which had not yet been developed but which had been used for millions of years by bats. He enlisted the help of his daughter to catch bats in mist nets under old schools or in bell towers. These were horseshoe bats which use ultrasound as they fly at night and navigate caves and dark places without being able to see. The following day he would record them in a blacked-out room strung with fine wires. That night they were returned to their roosts. Using these sound patterns he designed transducers which formed the basis of a device to help blind people navigate independently. In 1965 he was awarded the inaugural National Annual Achievement Award by the Worshipful Company of Scientific Instrument Makers.

Leslie maintained his connections in the Admiralty and his collaborators in the US Navy especially his great friend Art Rochon. It was via these connections that he was made aware how close the world came to annihilation during the Cuba crisis. He decided to take his family to a safer place. The opportunity arose to develop an electronics hub in Christchurch New Zealand based on the Department of Electrical Engineering at Canterbury University. In 1965 he took his family by sea to New Zealand and over the next 20 years he developed a thriving department with a reputation for high quality education and prolific wide-ranging research. He travelled round the world regularly, raising money for research in his department. He spent sabbatical years in Boston and in England.

Throughout he continued to develop ever more sophisticated ultrasonic devices for the blind but also for uses in medicine and with robotics. He returned to his underwater roots developing devices for divers based on dolphin sonar, which he studied in Hawaii, and sophisticated side scan sonar for use on smaller fishing vessels.

During his 20 years at Canterbury he served as Dean of Engineering, and on the University Grants Committee and was also part of a government think tank on development of technology and power planning. In 1971 he was the first engineer to be elected a Fellow of the Royal Society of New Zealand. At age 60yrs he took a Personal Chair and spent extended time in England and the United States on various fellowships, collaborating with institutes for the blind, and researching sensing in robotics.

Following retirement from Canterbury University in 1985 he was made an OBE for his contributions to education. He built a research business, Bay Advanced Technologies (BAT), based in Russell in the Bay of Islands using young IT developers and instrument makers from all over the world. This resulted in his pinnacle achievement, the sophisticated spatial sensing device for the blind, KASPA. He won the inaugural Saatchi and Saatchi Innovation Award for this device. He continued to develop ultrasonic devices for the blind in collaboration with the education guru Kazuhiko Imamura. His wife Nora, who was a sociologist and a nurse, worked closely with the blind educators, as she was a talented teacher and was interested in the problems of co-dependency in the disabled/teacher relationship.

At age 79yrs he gave an hour-long keynote address to the Acoustical Society of America using video on Power Point for which was well received. It was the 150th anniversary of Alexander Graham Bell.

Leslie finally retired at age 84 and lived with his daughter. He always said he had lived an exciting and fulfilling life. He said the decision he made, with his wife, to move his whole family to New Zealand, was the best he could ever have made. He was an advocate of equal opportunities for women and encouraged his wife and two daughters to take advantage of all the educational opportunities which were freely available. He also took advantage of the availability of skiing and boating with his family and living in beautiful places surrounded by bright young minds.

By Daphne Climie (daughter) and family