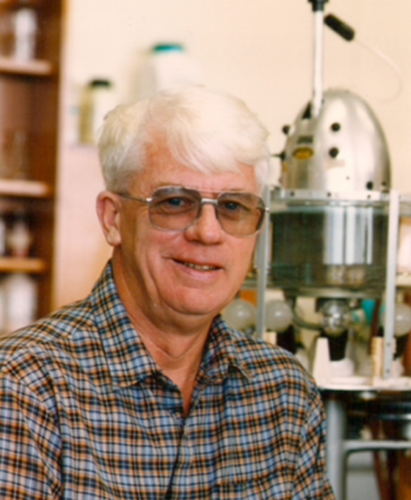 P. Grattan Roughan made fundamental contributions to plant lipid science that now form the core of our understanding of fatty acid metabolism in photosynthetic organisms. As a leading plant lipid researcher Grattan reminded the world that great science can originate from all parts of the world and the best insights sometimes come with a little distance from the crowds. His work and life gained the sincere admiration from his many colleagues and friends throughout the world.

Grattan was born July 4, 1937 in Dunedin, but lived mostly in Invercargill while growing up. During his years at school, he excelled at rugby and especially tennis where he represented Southland around the country. He left school in 1954 with no clear goal in mind. He entertained a career in teaching but was encouraged by his school principal to set his sights toward higher education. In 1955 he had a few labouring jobs, but it was while working at a hospital laboratory that the idea of a career in science seemed to take root. He graduated from the University of Otago with BSc (1960) and MSc (1962) degrees and received his PhD degree in Biochemistry from Massey University in 1968.

Between 1962 and 1965, Grattan worked at the Wallaceville Research Centre of the Department of Agriculture and Fisheries, where he met his future wife, Sally. Grattan and Sally were married 15th February 1963 in Upper Hutt and moved to Palmerston North in 1965, when Grattan accepted a scientist position with the Plant Physiology Division (PPD) of the Department of Scientific and Industrial Research. After completing his PhD with Prof. Dick Batt at Massey University in 1968, Grattan became focused on lipid metabolism in plants. Grattan was a gifted hands-on experimental scientist who loved to work at the bench and did so throughout his entire career. His discoveries rewrote the textbook description of lipid synthesis in plants and led to his election as a Fellow of the Royal Society of New Zealand in 1988 and to the award of DSc from the University of Otago in 1989.  Grattan also received the DSIR Ministerial Award for Excellence in Science, a Fulbright Scholarship in 1990, and in 1995 he was awarded a research grant from the Marsden Fund.

During his long career, Grattan worked with a series of collaborators: Roger Slack, Ross Holland, Sue Gardiner, John Browse, and visiting scientists: Jurgen Soll, Ernst Heinz, Guy Thompson, John Cronan, Ikuo Nishida, John Ohlrogge, and he enjoyed visiting and doing research in laboratories in the United States and Australia during periods of sabbatical leave. Everyone who worked with Grattan came to appreciate the creativity he brought to his research and his scientific productivity. Grattan and Sally were wonderful hosts who helped visiting scientists feel more than welcome, found accommodations for their stay, made arrangements for children to attend New Zealand schools, and led tours of their favorite places. They could make simple get togethers feel festive and joyful. Many visitors who came to the lab for the science also fell in love with New Zealand and made return trips whenever possible.

In 1970, Grattan published results of 14CO2 and 14C-acetate radiotracer experiments with pumpkin leaves that demonstrated that fatty acids synthesized in the chloroplast of leaf cells were very rapidly incorporated into phosphatidylcholine, the main structural lipid of the endoplasmic reticulum. The labeling kinetics of fatty acids on phosphatidylcholine indicated that this lipid was a major substrate for the synthesis of polyunsaturated lipids in plant leaves. In the same year, Grattan persuaded Roger Slack to join PPD and together they set out to understand and expand upon the in vivo results from Grattan’s pumpkin experiments. As part of this exploration, Grattan decided to investigate fatty acid metabolism in isolated chloroplasts. He recognised that many studies of isolated chloroplasts were based on chloroplast preparations with fatty acid synthesis rates far below those occurring in intact plants, and therefore likely not representative of whole plant metabolism. Grattan found that subtle differences in plant growth and chloroplast preparation methods greatly impacted rates of chloroplast fatty acid synthesis. Systematic evaluation of all materials and procedures led to his use of young, rapidly expanding spinach or pea plants grown hydroponically. Leaves from these plants were harvested within two hours of the start of the light cycle followed by rapid homogenization and centrifugations performed within 5-7 min. Chloroplasts produced by this procedure synthesized fatty acids at rates equal to or above those observed in intact plants and 5- to 10-fold higher than rates reported from almost all other groups.

One of us (JB) joined Grattan and Roger’s group at PPD in 1978. Grattan’s daily routine was to cycle to the lab, arriving by 8 AM to prepare media and to harvest young rapidly-expanding spinach leaves. By 9 AM he was assaying the freshly prepared chloroplasts in his trusty Warburg apparatus with a selection of carefully chosen substrates and cofactors. The fast preparation of chloroplasts was facilitated by a centrifuge-hand-braking technique that would give any laboratory safety officer a conniption fit. The exquisitely simple and elegant experiments that he performed provided the in vitro evidence to complement results from in vivo labelling experiments with intact plant tissues. By 1980, Grattan and the lipid group at PPD were able to define for the first time the two major pathways of glycerolipid synthesis in leaves. One, the prokaryotic pathway, is confined to the chloroplast, and in most plants makes a minor quantitative contribution to total cellular lipid synthesis. The second, the eukaryotic pathway, is an elaborate collaboration between the chloroplast, the cytoplasm, the endoplasmic reticulum, and other organelles of the cell involving export, import and metabolism of lipid intermediates to facilitate and control the composition of each membrane system in the cell. This two-pathway model is now the textbook paradigm that guides and facilitates our investigation and understanding of membrane lipid synthesis and the many roles that these lipids play in membrane function, cell biology, and life processes of plants. As a tribute to this seminal contribution, a chloroplast fatty acid that is central to the prokaryotic pathway is now named Roughanic acid.

Grattan also probed hypotheses on how membrane lipid composition might determine the chilling sensitivity of species such as amaranthus, soya bean and maize that are damaged and killed by non-freezing temperatures in the range of 0° to 10° C. His extensive analysis of chilling-sensitive and chilling-resistant plants indicated that there is no simple relationship between membrane lipid composition and chilling damage. Instead, it is likely that plants evolved in tropical regions acquired traits that are beneficial in consistently warm environments but that result in damage at colder temperature typical of temperate regions.

In 1985-86 JC spent a sabbatical leave with Grattan in the Mount Albert Research Centre. I was enamored with the procaryotic fatty acid synthesis in chloroplasts since I worked with fatty acid synthesis in bacteria and Grattan was the expert. However, I must confess that escaping an Illinois winter was also a factor. Grattan and I first met when we landed in Auckland with our two little boys. Grattan and I became good friends almost immediately and that prospered and endured. My idea was to use the acyl carrier protein techniques we had developed for E. coli in chloroplast lysates. This had some success and contributed to the chilling sensitivity story mentioned above. However, my enduring contribution was to prepare the silver nitrate required for chromatographic separations of saturated and unsaturated fatty acids. Grattan’s supply was almost nil, the price of silver was sky high and funds were scarce. However, while poking around in the small storeroom I found small dusty bottles containing several hundred grams of silver nitrite which I oxidized to silver nitrate and crystallized. Grattan was still using this supply when he closed his lab.

Judging by my later trips to New Zealand, Grattan’s retirement was mainly involved with family and old friends. Grattan and Sally decided no more overseas trips (Australia did not count) and they traveled extensively in New Zealand and Australia often with relatives and friends. Grattan was a marvelous and enthusiastic driver. They first lived in a charming vacation batch on Algies Bay North of Auckland. However, this was on a challenging bluff overlooking the sea which engendered a lot of stairs that came to be too much (Grattan had bad knees from his rugby days) so they moved to a neighboring development on the flat. When I visited them there it seemed clear that they were not happy with the move. Their two children, Nick and Joanne, and grandchildren had moved to the South Island and lived in Wanaka, a resort town. Sally and Grattan visited Wanaka several times and decided to move there. They found an ideal house in a retirement community that had gardens and communal green houses where Grattan could grow his chili peppers. They were very happy there. Grattan occasionally wanted to talk science and was pleased when I told him that he could see if his papers were being cited on Google Scholar.

"I could not imagine what I would rather be doing. When Nick and Joanne asked in the early 70s what I did at the lab all day I could only compare my work with playing in the sandpit. How lucky is that?"
Grattan Roughan