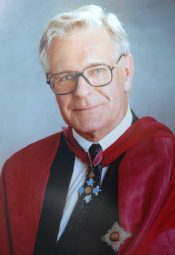 Professor Sir (Philip) John Scott was a medical scientist who made major contributions of lasting international significance to the field of cardiovascular disease. John also undertook many other important roles in medical scholarship, the practice and governance of medicine, and the wider community during decades of service in New Zealand and elsewhere. He was recognised by the award of his knighthood (KBE 1988: “for services to medicine”); by election to the Royal Society of New Zealand (FRSNZ 1987); and by appointment as President of the RSNZ (1997-2000).

John Scott’s ethical leadership and moral courage were definitively acknowledged “for services to medicine”. His knighthood could just as easily have been for services to the community.

John had so many excellent qualities that it is impossible to capture them all here. A manuscript recently dedicated to John’s memory recognised “his scientific leadership, profound humanity, support of justice, and exemplary care and concern for patients.”
As his close colleague Professor Des Gorman has observed, John was “a man much admired and loved. He meant a great deal to so many people: his intellect and academic achievements, which he wore lightly, his humility and his compassion brought comfort to his patients and shaped not only his family and friends, but also generations of doctors.”

He had a penetrating intellect which he used to great advantage when it came to understanding human relations and motivations, and would invariably be able to make sense of difficult and confusing situations, to pare them back to their essentials, summarise them succinctly, and then come to a sensible and best course of action.

John exercised a profound influence for the good on the development and shaping of the careers of large numbers of medical students. He helped many to take difficult decisions when the way forward was uncertain and how to do the right thing was unclear, not only in medicine and the allied professions but also in many other walks of life. He continued to perform this role right to the end.

John was an acknowledged scientific leader. He greatly valued the application of the scientific method in medicine, a principle to which he was dedicated throughout his life. He helped to ensure that the scientific basis of medicine was a key foundation on which teaching in the new medical school in Auckland was based. He communicated the value of science in medicine effectively and clearly to generations of students.

John become a medical student at the University of Otago (MBChB 1955) and also completed a BMedSc degree (1953), which began his life as a medical researcher and academic scientist-physician. As was the case for many physicians of his generation, he not only undertook hospital work in Auckland after graduating, but also spent time in general practice in St Heliers, before departing with his family to the United Kingdom.

In England, he worked first at the Postgraduate Medical School in London at the Hammersmith Hospital, and became a Member of the Royal College of Physicians (MRCP, later FRCP). He followed this with biochemical studies at the University of Birmingham, gaining a doctorate in medicine (MD 1962) that led to his developing an internationally-leading research programme on his return, at a time when New Zealand was excelling in various fields of research.

John’s dedication to New Zealand led to his return at the invitation of Sir Douglas Robb, to play a major role in establishing the then new medical school in Auckland. There he continued his scientific research on lipids and arterial pathophysiology, both clinically and in the laboratory, using resources at the DSIR Mt Albert, and at Auckland, Greenlane and Middlemore Hospitals.

An examination of John’s work, published in some of the world’s leading scientific journals, further reveals his humility. He, along with members of his research group, made pivotal contributions to the scientific basis of medicine through his work on atherosclerosis (or ‘hardening of the arteries’), and its clinical manifestations in heart attack and coronary heart disease.

Consistent with his rigorous approach, John implemented a two-pronged scientific programme: one aspect was clinical, describing atherosclerosis and its sequelae, heart attack and coronary heart disease, in patients; the other dissected mechanisms of atherosclerosis in parallel model experimental systems. His clinical investigations were reported in a series of landmark publications, which are distinguished by their logic, clarity, and insight. His studies of the interplay between lipoproteins and atherosclerosis have provided key and lasting understanding of disease processes.

John’s scientific legacy is thus one of major contributions to the understanding of atherosclerosis, heart attack, and coronary heart disease. His studies made crucial contributions of international significance to cardiovascular medicine, and he became widely recognised as a leader in the field, which led him to be invited to undertake senior advisory roles, inter alia with leading international pharmaceutical companies, although he remained independent and was characteristically careful to avoid inappropriate remuneration and conflicts of interest.

Through this original work, John elucidated the processes that lead to or cause atherosclerosis (1-8), and influence survival following heart attack (9-15). This work has stood the test of time and his contributions are just as relevant today as they were when first published.

Lipid metabolism and the mechanism of atherosclerosis: Atherosclerosis is the main process that leads to or causes heart attack and coronary heart disease, and is therefore a leading cause of disability and death. John described mechanisms by which cholesterol-transporting low-density lipoproteins can diffuse to the main site of damage in the arterial wall, where they become trapped by increased glycosaminoglycan, thereby causing atherosclerosis.

John’s acute insights into the underlying disease processes, led to a series of publications in which he clearly demonstrated that cholesterol-carrying low-density lipoprotein particles can migrate from the plasma into the arterial wall, where they accumulate in the main region of damage and deliver the cholesterol that forms atherosclerotic plaque (1,2,4-7,16).

These original findings provided a framework for the idea that mechanical stress, augmented by processes such as hypertension (8), leads to or causes increased accumulation of glycosaminoglycans in the aortic wall, and that secondary trapping of lipoproteins by sulphated glycosaminoglycans produces atherosclerotic plaques (16). These mechanisms are widely regarded as causative of atherosclerosis to this day (17).

A risk prediction index for survival after acute myocardial infarction and the origin of the Coronary Care Unit: John led the second, parallel programme in which he undertook fundamental clinical studies of factors associated with the risk of death following acute myocardial infarction (‘heart attack’) (10-15). The outcomes served as the basis for development of a risk prediction index that was employed to measure the efficacy of different interventions aimed at improving survival following myocardial infarction. This analysis provided compelling evidence supporting the development of the specialist facility known as the Coronary Care Unit which, by concentration of relevant resources, provides important advances in the management of acute myocardial infarction and its sequelae (10-15). These contributions were widely acknowledged by the scientific and medical communities, both locally and internationally.

John was widely recognised as having made major contributions in ensuring the effective application of ethics in medico-legal practice, justice, and the protection of the public. He was effective in promptly identifying serious medico-legal problems and prepared to take not-always popular but necessary stands, particularly when human safety might be compromised.

During the late 1970s through the first half of the 1980s, John became increasingly caught up in leading New Zealand’s response to an ugly cancer scandal that began in Auckland and spread to Australia, the Pacific, and finally to the United States of America.

With his characteristic insight, John realised the emergent problem for what it really was and quickly appreciated the very real threat that it posed to the good name of the legal and medical professions in New Zealand. He also recognised that, unless the matter was dealt with properly in New Zealand by New Zealanders, it had the potential to cause grievous damage to the reputation of the legal and medical professions in this country. These views were shared by senior medical and legal officers in New Zealand, Australia and the United States.

Although he had invested a great deal in building his medical and scientific careers, and remained vitally interested in the application of science in medicine right up to the end of his life, John made the decision in the late 1970s that he must do the right thing by leading the efforts to minimise the damage being done; to try to right the wrongs that were being committed. Reluctantly, therefore, he put aside his scientific work so that he could devote more of his time and energy to making things right.

His investigations led him to spend an uncomfortable and difficult period behind the then ‘iron curtain’ as he pursued the truth of the matter. During this extraordinary time, John’s leadership, judgement, ethics and moral courage were tested to the limit. Elizabeth and their children were also subjected to extraordinary pressures caused by these events, but they did not buckle: rather, they provided John with the unwavering support he needed to get the job done.

John, working with others - particularly Dr Gordon Nicholson and Professor John Buchanan - established a platform that ultimately enabled the medical and legal authorities in the United States to intervene: to end the wrong-doing and damage, and to clear away the confusion. John’s intervention paved the way for the successful prosecution and many years’ imprisonment of the perpetrator in Los Angeles in 1983.

The Californian judicial system was deeply grateful for John’s support. Here is what the District Attorney of Los Angeles County wrote to John, following the successful prosecution of the case in the Superior Court at Los Angeles (in July 1983).
“We of the District Attorney’s office recognize and appreciate the contribution you have made towards this successful end. The successful operation of our criminal justice system depends upon people like you who are willing to spare their time to assist those in law enforcement in making this land a better place for all. It was a pleasure to meet you and to know that your sympathies were on the side of justice and the protection of the public”.

On learning of John’s death (in October 2015), the deputy district attorney who was the main prosecutor in the case (now a retired US Superior Court judge) wrote of John as “a great man who will be missed”.

This was but one example of the many difficult medico-legal challenges that John was called upon over the years to deal with, in the interests of justice, the protection of the public, and the integrity of the medical and legal professions of New Zealand. In particular, the New Zealand government came to make extensive use of his integrity, skills, knowledge and experience in these matters.

To memorialise the lasting legacy of his contribution in South Auckland, there is now, in the Middlemore complex, a Scott building named after John, and his close colleague and fellow academic medical scientist, David Scott.

Sir John Scott was a great man; one who loved his family and his fellow men; a man of ethics and moral courage - a man for all seasons; a pioneering medical scientist who also understood and lived the delicate and necessary interplay between science and humanity in medicine; who was humble; who had faith, hope and charity, but above all, charity; and who strove, in all things, always, to act in the interests of all.

John is survived by his children – Janet, Michael, Jenny and Philippa – and by Lady Alison, and was predeceased by Lady Elizabeth and then by Lady Margaret.