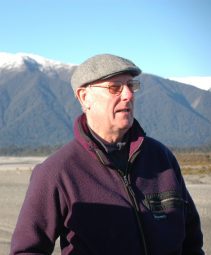 Emeritus Professor Richard J Norris died on 29 June 2016 in Wellington. Richard was born on 26 July 1945, and spent his early life in the village of Newbold, on the outskirts of Chesterfield, Derbyshire, England. After attending Chesterfield Grammar School, he won a scholarship to Balliol College, Oxford where he read Geology, achieving a BA with First Class Honours in 1966, and in the process winning the Huxley Prize at Balliol College and the Burdett-Coutts Prize for Geology. An MA and DPhil followed in 1970, also in the Oxford department, funded by a NERC Research Scholarship. His postgraduate studies unravelled the structural and metamorphic history of the rock sequence in the Tauern Window, Austrian Alps, as part of a research team supervised by Professor R. Oxburgh. Having been offered a lectureship at Otago, he was persuaded that New Zealand really was “God’s own” by Malcolm Laird, a New Zealander completing a DPhil in the same department. He and his wife Hilary (married 1969) arrived in Dunedin in time for the start of the 1970 academic year.

Richard was a structural geologist, interested in the evolution of tectonic belts and was soon at home in New Zealand, involved in a variety of research projects in our orogenic terranes. By 1977 he had been promoted to Senior Lecturer.

In 1979, a major catastrophe, in the form of the East Abbotsford Landslide in the outskirts of Dunedin, dominated local and national media attention. Richard, together with Professor Douglas Coombs, was involved in on-site investigations and in the subsequent protracted Commission of Enquiry.

At about this time research collaboration between Richard and Robert (Bob) Carter was established to investigate the young sedimentary basins underlying the Waiau River valley and Lake Te Anau in Western Southland, extending through Mararoa, north to Lake Wakatipu. These basins had been investigated for their hydrocarbon potential both on-land and off-shore of Te Waewae Bay, but since the rocks are dominated by homogeneous, deep-water, macrofossil-free mudstones, the age and structure was poorly understood. With the help of age determinations from microfossils and detailed geological mapping Richard and Bob published a definitive IGNS Science Report in 2005 on the geology of these southern basins.

In collaboration with colleague Alan Cooper, an annual field trip was organised in the late 1970s to take third year students to see the major geological structure of New Zealand, the Alpine Fault. Their rationale was that every graduate in geology from the University of Otago should have seen the on-land boundary between the Pacific and Australian tectonic plates as part of their basic education. However, they quickly realised that very little was known about the exact location, geometry, style of deformation and frequency of earthquakes on the Alpine Fault. A research programme was duly instituted that was to last for the next 45 years, beyond both of their respective retirements! Research involved detailed fieldwork in the West Coast bush, enduring either swarms of sandflies during the day, or mosquitos at night. Torrential rain meant that many days were lost. Many research students cut their teeth on Alpine Fault-supervised projects, including Rupert Sutherland and Virginia Toy, who are now two of the joint leaders of the on-going DFDP (Deep Fault Drilling Project) on the Alpine Fault. The research results were published in national and international journals, and as map sheets available on the Dept of Geology, University of Otago, website.

Despite the domination by Alpine Fault research, Richard continued to be involved collaboratively in ore genesis (particularly gold mineralisation) in the Otago Schist (with Dave Craw), Antarctica (supervising Andrew Allibone), together with recent tectonics of both East and Central Otago (with Chuck Landis and Pete Koons, and James Jackson (Cambridge)). This latter research has led to service and advice on seismotectonic evaluation and earthquake hazards in the South Island to Otago, Southland and South Canterbury Regional Councils, Civil Defence, Dunedin Lifelines and the Earthquake and War Damage Commission.

Richard’s published research included 93 refereed publications (list below), and over 20 non-refereed reports and reviews. There were numerous conference presentations, including several invited addresses. In recognition of these research contributions he was selected as the annual Hochstetter Lecturer for the Geological Society of New Zealand in 1991, and was awarded the Hutton Medal (1996) and later elected Fellow (1998) by the Royal Society of New Zealand.

Richard acted as Associate and Chief Scientific Editor of the Journal of Structural Geology from 1993 to 2002 and was an Associate Editor of Geological Magazine from 2000. He has reviewed scientific papers for many national and international journals and was nominated as “Exceptional Scientific Reviewer” by the Geological Society of America in 2006. He has examined theses from universities both within New Zealand and overseas, and has served on panels, committees, and working groups for many government and community organisations. He has given guest lectures to many local clubs and societies and contributed to the more formal University of the Third Age continuing education programmes at Otago.

Richard was a highly respected member of the Geology Department for over 40 years. As well as Head of Department, he was Acting Head during staff absences, and always ran and participated in staff discussion in an entirely democratic and rational manner, making a major contribution to the collegial environment of departmental meetings. He was also a member of various Science Division and University Boards, Committees and Panels.

Richard was a keen cricketer in his younger days, playing club cricket in Dunedin, where he was a very useful medium paced bowler. He helped maintain the family garden, doing most of the hard labour for Hilary to plant, propagate and harvest. After retirement Richard and Hilary moved north, buying a house at Waikanae Beach and a flat in Wellington, in part to be closer to son Michael and family, and in part to enjoy the seaside environment. Visits from, and to, daughter Katherine (Sydney), were also easier than when based in Dunedin. Richard kept up to date with Otago news with an on-line subscription to the Otago Daily Times, which he read from cover to cover. Unfortunately, a succession of illnesses robbed Richard of the prolonged and productive retirement that he and Hilary deserved.

Norris RJ, Koons PO, Cooper AF 1990. The structure of the present obliquely-convergent plate boundary in the South Island of New Zealand: implications for the interpretation of ancient collision zones. Journal of Structural Geology 12: 715-725.

Norris RJ 1979. A geometrical study of finite strain and bending in the South Island. In The Origin of the Southern Alps. R. I. Walcott & M. M. Cresswell eds Bulletin of the Royal Society of New Zealand 18: 21-28.

Norris RJ, Oxburgh ER 1968. Geology of the Zentralgneiss around the Kleine Muhldorfersee in the Reisseck area of the Eastern Tauern. Verhandlungen der Geologischen Bundesanstalt (Wien) 1/2: 179-189.