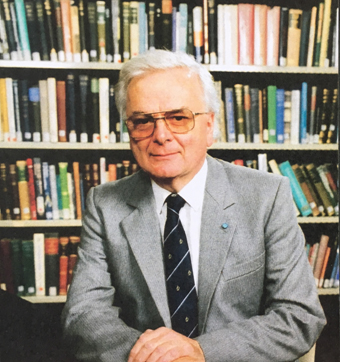 Dick originally graduated from the University of Sydney School of Physics and spent a few months with the Radiophysics Division of CSIRO, then on the Sydney campus. He worked for a year in the sub-Antarctic on Macquarie Island in 1955-56, just before the International Geophysics Year, and then started graduate research while employed in Tasmania. In those eight years he acquired an MSc, PhD, and later a DSc. From 1957 to 1963 he served as a physicist in the Ionospheric Prediction Service based in Hobart, before working at the University of Tasmania as lecturer and senior lecturer from 1963 to 1966. In 1966 he was appointed Professor at the University of Otago in New Zealand, retiring to become an Emeritus Professor in 1998.

Through his long career he worked on multiple different scientific topics spanning all the electromagnetic frequency range from ULF to HF. Dick made a number of fundamental contributions in several fields of planetary and geophysics, mostly using electromagnetic theory and techniques. He was involved in fundamental theory, the understanding and interpretation of electromagnetic signals, and the design and construction of hardware.

One of his earliest significant discoveries was the deduction of the polarity and longitude of the dipole axis of the magnetic field of Jupiter from 10 MHz radio bursts. This was in 1963, more than a 10 years before Pioneer 10 arrived at Jupiter, and relied upon state of the art ground-based observations and detailed radio science knowledge. We believe that Dick was the first to interpret the radio emissions from Jupiter in a way to deduce physical parameters.

Another ground-breaking example was the first correct theory put forward to explain the generation of VLF emissions ("whistler mode chorus") generated by radiation belt electrons through anomalous Doppler shifted resonance. He also provided an explanation of the dynamic spectral (frequency-time plane) shape of "hooks", "risers", etc, in terms of a phase bunch of electrons travelling along a geomagnetic field line. He verified that short-range echoes observed on HF ionospheric sounders located near the sea were caused by coherent backscatter from sea waves which led him to suggest sea scatter radar as an oceanographical tool. He undertook the first recordings of whistler mode signals remote from the conjugate of a VLF transmitter, reception on the ground of non-ducted whistlers, VLF generation by modulation of the auroral electrojet by an ionospheric heater, identification of phase perturbations ("phase Trimpis") in association with whistlers, identification and interpretation of VLF perturbations caused by red sprites, and the first ground observation and video capture of red sprites outside the USA.

National research funding bodies are recent developments in New Zealand and Australia. Thus, in addition to being an experimentalist and theoretician, Dowden had to design and (usually) make his research equipment himself. For VLF dynamic spectra he devised the "Dynagraph" that used a tape recorder with a device to give repeated (about 500 times) sampling of every portion of tape. Other inventions were the Jupiter polarimeter which suppressed man-made transmissions near 10 MHz and the RF heating beam scanning system used at the Max-Planck-Institut fur Aeronomie's Ionospheric Heating facility at Tromsø in Norway (though designed and built in Dunedin, New Zealand). From the late 1990s the "OMSK" and later the "OmniPAL" VLF receivers used for Trimpi studies were also designed and built by Dowden and his students.

Professor Dowden was an active member of the international scientific community, a member of the American Geophysical Union since 1966, a Fellow of the Institute of Physics (UK) from 1968, Fellow of the Royal Society of New Zealand since 1983, and Fellow of the American Geophysical Union from 2003. He served as Vice President of the International Union of Radio Science (URSI) from 1987-1993. In addition, Dick was the Beverly Professor of Physics and Michaelis Medal recipient of the University of Otago, a former President of the New Zealand Institute of Physics, Commission Chairman and Editor-in-Chief of the URSI Radioscientist, Member of the International Astronautical Academy, T. K. Sidey Medal recipient of the Royal Society of New Zealand, Australian Antarctic Division Medal recipient, Member Otago Polytechnic Council, Member Otago Museum Trust Board, and Founding Director of Low Frequency Electromagnetic Research Ltd.

Richard Dowden was one of the foremost geophysicists in the Oceania region. As such he was strongly involved in the organisation of international meetings held inside this region, and served as the regional editor of the Journal of Atmospheric and Solar Terrestrial Physics (1990-1998). After retiring from the University of Otago in New Zealand in 1998, he remained scientifically active for more than a decade. In that period he developed the idea behind the "TOGA technique", which is at the heart of the global real-time World Wide Lightning Location Network (WWLLN).

As an academic for many years Dick was an active teacher, lecturing students in all levels of undergraduate and graduate courses. He also supervised many postgraduate students, including both of the authors of this memoriam, who remember his innovative ideas, his boundless enthusiasm and his inspiring encouragement. Since his death the Otago University Physics Department has been contacted by former students who remember him as a very enthusiastic lecturer.

His funeral was held in Dunedin on Saturday 17 December 2016. Later that day a memorial service occurred at the Staff Club of the University of Otago. Dick is survived by his wife Eleanor, their eight children and 11 grandchildren.

Professor and Head of the Physics Department, University of Otago