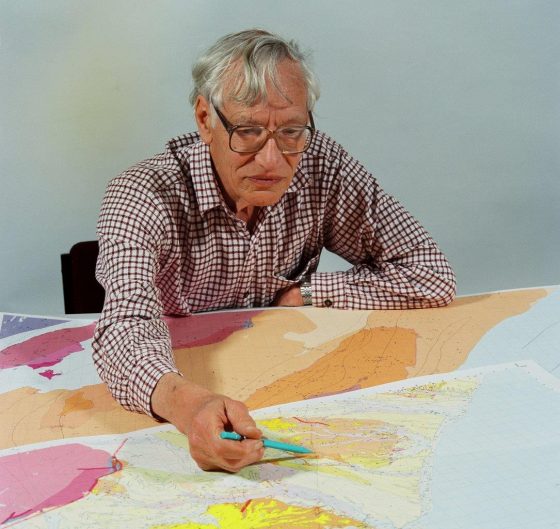 R.P. (Pat) Suggate has had a distinguished career as a research scientist, Director of New Zealand Geological Survey, and a scientific mentor. His first scientific paper was published in 1950 and he continued active research into his retirement years, publishing his last paper in 2015.

Pat Suggate was born on St Patrick's Day in 1922. Too young for military service at the outbreak of World War 2, he completed a geology degree at Oxford University. He met his future wife, Daphne Reynolds, at university, and they were married in 1944. From 1942 Pat served with the Royal Artillery and the Royal Army Ordnance Corps, and was demobilised in early 1947 with the rank of captain. He started to look for work, and a fortunate meeting with New Zealand geologist Dave Brown, then studying in England, led him to apply for a job with the New Zealand Geological Survey.

Pat and Daphne arrived in Auckland on 15 April 1947, en route to Greymouth. In the late 1940s a succession of young geologists was sent to Greymouth to gain some experience under the stimulating influence of Harold Wellman. The Greymouth years had an enormous effect on Pat as they defined his long-term research interests, especially in coal rank, Quaternary stratigraphy and chronology and neotectonics. His first major investigation was to examine the coal resources of the Murchison area, with its exceptionally thick Cenozoic sequence and spectacular deformation. Over the next 40 years Pat returned to Murchison many times. and eventually completed mapping of the Cenozoic rocks for three 1:50 000 geological maps of the region.

Detailed mapping of the Reefton Coalfield led to studies of coal properties and their relationship to coal rank. His monograph New Zealand coals: their geological setting and its influence on their properties was a pioneering synthesis based on chemical data from a wide range of New Zealand coals.

After five years in Greymouth, the Suggate family moved to Christchurch. Some of the first radiocarbon results were coming available in the early 1950s, including wood and peat from beneath the city. Pat pulled together the information from a century of water drilling to produce a subsurface stratigraphy beneath Christchurch city, which was subsequently used as a key site for documenting the Postglacial rise in sea level.

Work on the glacial and interglacial rocks of Canterbury and the West Coast led to a long interest in Quaternary stratigraphy, and this was enhanced by a year spent at the Sub-department of Quaternary Research at Cambridge University in 1957-58. It also led to a long-term collaboration with Dr Neville Moar, palynologist at Botany Division, DSIR (now Landcare Research).

About that time the Suggate family returned from the UK, the Director of the New Zealand Geological Survey, Dick Willett, started the "Four Mile" project, an ambitious 10-year plan to prepare a set of I :250 000 geological maps covering the whole country. Although Pat is credited with the authorship of only one sheet (Christchurch), he played a major part in compilation of all sheets in the central South Island. especially the Quaternary stratigraphy. This culminated in the production of Late Pleistocene geology of the northern part of the South Island, New Zealand , which summarised the Quaternary sequences in different catchments, analysed the relationship between glacial deposits and raised interglacial shoreline deposits, and proposed an integrated chronology for the late Quaternary of New Zealand.

One aim of the '"Four Mile" project was to produce a definitive account of New Zealand geology. Pat was appointed editor, and supervised compilation and production of Geology of New Zealand and wrote substantial parts himself. Although much delayed before its eventual publication in 1978, this remains the most comprehensive account of New Zealand geology, still widely quoted. Pat was fortunate to survive the sinking of the Wahine in Wellington harbour in 1968, when the master copy of the manuscript was lost. The story of how he tucked a critical section into his jacket before abandoning ship has entered New Zealand’s geological folklore.

By the mid 1960s Pat was recognised as one of New Zealand’s leading geoscientists. He was awarded a DSc for his published work, and elected a Fellow of the Royal Society of New Zealand in 1963. From about 1965 onwards he played an increasing part in the management of the Geological Survey. He took over responsibility for the geological mapping programme and moved to Lower Hutt in 1967. As geologists started detailed mapping after the “Four Mile” project, he undertook the responsibility for raising the standards of geological map compilation and interpretation, and made a point of visiting and supervising younger geologists in the field.

Since his earliest days in Greymouth, Pat had been aware of the ongoing deformation of the New Zealand landscape. and helped develop methods of measuring and analysing deformation long before GPS surveys were available. He had a long friendship with Gerald Lensen, and they were both major contributors to a Royal Society report in 1973 that recommended implementation of an earth deformation studies programme in New Zealand. Pat continued as an active participant in many fundamental tectonic debates. including the role of the Alpine Fault and the application of plate tectonic theory to the continental geology of New Zealand.

Appointed Director of New Zealand Geological Survey in 1974, he initially had hopes of boosting basic geological mapping which he saw as the core purpose of a geological survey. He was only partly successful because the following decade was dominated by concerns about energy resources following the rising cost of oil after the Arab-Israeli war of 1973. The Government's response was to boost investigation and use of indigenous resources within New Zealand, culminating in the “Think Big” projects of the early 1980s. The Geological Survey expanded rapidly during this period with initiation of the Coal Resources Survey, the setting up of a Government-owned petroleum company. and enormous expansion in hydro-electric capacity including construction of the Clyde Dam. It was not an easy time to be in charge, with constantly changing priorities and political pressure for instant results. Pat's carefully considered advice did not always endear him to politicians or ministerial advisers, but he ensured that good quality scientific advice was consistently given (although not always heeded).

Taking a longer-term view, Pat appreciated that New Zealand needed a soundly-based understanding of its sedimentary basins, both onshore and offshore. to be able to intelligently explore for hydrocarbons. He started the Cretaceous-Cenozoic Project (CCP). a series of basin syntheses covering the whole New Zealand region. Although not completed until after he retired, in the 21st century we are seeing the value of this far-sighted approach as hydrocarbon exploration is able to take advantage of the comprehensive basin syntheses he initiated.

Throughout his period as Director, Pat insisted on high standards for all material emanating from the Geological Survey, reading and commenting on almost every document produced within the organisation. During this period he carried a huge workload, but any manuscript submitted for publication would be returned to the author within a few days, usually annotated with marginal comments in tiny handwriting, and often with a request to see a revised version.

Retirement in 1986 was an opportunity for Pat to actively continue his scientific research as a Research Associate. He completed several major mapping projects through to publication as well as a large number of papers on Quaternary stratigraphy and neotectonics and more recently on coal rank related to hydrocarbon generation. His studies of coal rank in many countries have allowed a general synthesis of the relations between coal analytical data of many kinds and the effects of burial and paleotemperature to be developed, and he developed a universal coal rank scheme (which became known as Suggate rank, Sr). He also took the opportunity to learn new skills – for example the advent of spreadsheets and electronic databases allowed him to analyse large collections of coal analyses from overseas coalfields. In his late eighties he taught himself analysis of seismic records so that he could critically evaluate seismic data from the West Coast.

One of Pat's characteristics has been his thoroughness and persistence. often revisiting problems he worked on earlier in his career. For example, his first published map of the sequence of multiple glacial advances in the Hokitika area was published in 1958. Several revised versions have been produced in the intervening 40 years, culminating in publication of a new map and description, which is one of the publications for which he was awarded the McKay Hammer by the Geological Society of New Zealand in 2001.

As well as his own research and administrative responsibilities, Pat Suggate has played a major part in the life of the scientific community, both nationally and internationally. He was a founder member and former president of the Geological Society of New Zealand. He had strong connections with the International Union of Quaternary Research (INQUA) and was a member of the Board of the International Geological Correlation Programme (IGCP) during 1987- 92. He was frequently used as a reviewer by journals and individuals, both because of his willingness to do this work and because his judgement was respected as sound while also being constructive. He has been a mentor to many younger scientists, and has taken a particular interest in helping them develop writing and presentation skills.

To mark Pat’s retirement a group of colleagues prepared a special Suggate issue of the New Zealand Journal of Geology & Geophysics (volume 44, no 1, March 2001) under the title, “Tectonics and climate change in New Zealand”. Because so many papers were submitted, some had to be held over until the following issue of the journal.

Pat’s last visit to GNS was in August 2015, for a function to mark the 150th anniversary of the founding of the Geological Survey. It was very fitting that he was able to cut the commemorative cake.

Pat Suggate has a publication list of approximately 120 papers in peer-reviewed journals, in addition to many abstracts and conference papers. The number is somewhat misleading as it overlooks the huge number of reports and official papers on geological topics that Pat completed, ranging from a manual for geological map compilation to a discussion of methods for estimating coal reserves. Some of the reports he worked on or compiled are credited to “Officers of the New Zealand Geological Survey”.

The following list has been compiled in consultation with a group of colleagues to indicate what we consider are Pat's most significant scientific publications. Although impressive, we would caution that it underestimates his contribution to applied geology and to the nuts-and-bolts of scientific work.

Suggate. R. P. 1960. The interpretation of fault displacements of progressive flights of terraces. New Zealand Journal of Geology and Geophysics 3 (3): 364-374.

Suggate RP 1982. The influence of moisture content on vitrinite reflectance and the assessment of maturation of coal. New Zealand Journal of Geology and Geophysics 25 (2): 227-231.

Suggate RP 1974: Coal ranks in relation to depth and temperature in Australian and New Zealand oil and gas wells. New Zealand Journal of Geology and Geophysics 17(1): 149- 167.