2019: Dr Damien Scarf, University of Otago, Department of Psychology, has been awarded a Rutherford Discovery Fellowship for research titled ‘The Belonging Project’

Dr Scarf is a Senior Lecturer at University of Otago where he leads the Adolescent Behaviour and Child Development Lab. He is a psychologist who specialises in developmental psychology, with a focus on adolescents. Dr Scarf originally studied Zoology, before gaining his PhD in Psychology from the University of Otago in 2011. During the course of his PhD, he went to Columbia University as a Visiting Researcher on a Fulbright scholarship. He has won several research awards including the American Psychological Association Clever Systems Early Career Award and the New Zealand Psychological Society Goddard Early Career Award. 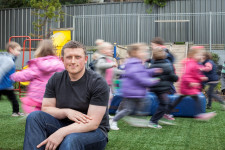 The United Kingdom recently appointed the first Minister of Loneliness. The appointment reflected perceived increasing rates of loneliness worldwide, including in Aotearoa New Zealand, especially for adolescents and older adults. Research shows that loneliness has a profound negative impact on our health and well-being and that the strength of social relationships has a larger impact on mortality risk than diet or exercise, and a comparable impact to moderate smoking. Research has also demonstrated that measuring whether people live alone is not a particularly accurate way of predicting mortality risk. The rate of loneliness in adolescents has increased across the same period that social media use has exploded, which raises the question: How can we explain greater rates of loneliness when we are more connected now than at any other point in human history?

Dr Scarf’s project draws on new theories of social identity, which postulate that people often define their sense of self in terms of their groups. This sense of a connected self gives us a sense of belonging, purpose and meaning. It is arguably a lack of identification with groups, rather than simply a lack of interacting with others, that underlies loneliness. Dr Scarf will be focusing on a specific dimension of social identity, the sense of belonging, which he hypothesises is especially important for our mental and physical health.

Dr Scarf will use group-based interventions that give specific populations such as adolescents, emerging adults, and older adults a place or group they can belong to. The project will investigate the benefits of belonging by collecting data from a diverse range of populations using a combination of cross-sectional, longitudinal, and qualitative methods. The outcomes of this project will help us gain a better understanding of social connection and to re-think the role of belonging in our physical and mental health.