Dr Ceridwen Fraser, University of Otago, has been awarded a Rutherford Discovery Fellowship for research entitled: ‘The race for new space: disentangling the processes that shape global patterns of biodiversity.’ 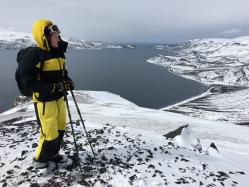 Environmental change is driving widespread movement and extinction of plants and animals, yet our understanding of the processes influencing these changes is vastly inadequate. New evidence suggests that we have long been completely misinterpreting how dispersal of species influences biodiversity patterns. We have assumed that if movement is occurring among populations, the immigrants should have a genetic influence on the original population (gene-flow). In contrast, we are now realising that dispersal does not always lead to gene-flow, and in fact is often thwarted by established populations preventing immigration by “density-blocking” new arrivals. In the absence of any competitive advantage, those immigrants that do settle in a new area have little chance of leaving a genetic imprint on the next generation, as they are usually vastly outnumbered by locals. Disturbance, such as destruction of coastal populations by earthquakes, is therefore important, as it can break the blocking influence of established populations, and allow new genetic lineages or species to get a foot in the door.  Dr Fraser’s work to understanding how widespread these processes are – for example, which sorts of species are more or less influenced by them – will help us to manage populations of plants and animals as distributions shift with environmental change. The research will also help us to understand how major disturbances, affect biodiversity patterns and ecosystem structure. Using cutting-edge genomic tools and modelling across a range of organisms and ecosystems, Dr Fraser’s highly integrative, broad-scale research programme aims to drastically improve our knowledge of how dispersal, disturbance, competition and extinction structure global biodiversity and influence ecological change. These results will inform core theory and feed into conservation management practices in New Zealand and across the globe.