2018: Dr Jonathan Squire, University of Otago, Department of Physics, has been awarded a Rutherford Discovery Fellowship for research entitled: ‘Cosmic Turbulence, Microinstabilities, and the Magnetisation of the Universe’. 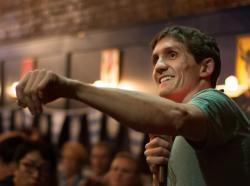 Dr Squire is an astrophysicist who studies the dynamics of gas and plasma and generation of magnetic fields across stars and galaxies. He completed a Bachelor of Science with Honours in physics at the University of Otago. In 2010, he received a Fulbright Fellowship to undertake his doctorate in plasma physics at Princeton University. Following his graduation in 2015, Dr Squire received Sherman Fairchid postdoctoral fellowship at Caltech, where he branched out into a variety of topics in theoretical astrophysics, including planet formation, the dynamics of galaxy clusters, and the physics of the solar wind that streams off the sun. Last year, he was awarded Marsden Fund Fast-Start grant, enabling him to return to the University of Otago. Alongside this scholarship, Dr Squire aims to increase public engagement with astronomy.

Magnetic fields are everywhere in the universe: in nearly all celestial objects, from galaxies to stars and planets, as well as in the diffuse media between them. But why is the universe magnetised at all? And how are such magnetic fields produced and sustained? These are key unanswered questions in astrophysics. At least part of the answer lies in the turbulent dynamics of plasma, or ionised gas, a fluid that is spread so thin that its ions and electrons cannot recombine into atoms. Some aspects of the way that plasmas govern magnetic fields and enable their rapid growth are well studied. However, in extremely hot and diffuse plasmas – which are thought to be key sites of magnetic field generation – our understanding is very limited. This is because magnetic fields also influence the plasma, hence causing a complex feedback process. Current theories of cosmic magnetism are limited without better understanding of these processes.

During his Rutherford Discovery Fellowship, Dr Squire aims to disentangle how plasma dynamics and magnetic fields interact to determine how and why the universe is magnetised. He will develop and test new theories of magnetic-field generation in turbulence, focusing on hot, diffuse plasmas with weak magnetic fields. The difficulties arise because collisions between particles in the plasma are rare, causing micro-instabilities (tiny wobbles in the plasma) to abruptly grow and violently mix the plasma and affect its motion on a large scale. Even very weak magnetic fields can therefore have disproportionate impacts on the plasma’s motion. Dr Squire will work with international collaborators to combine analytical theories, algorithms, and big data from simulations to better understand this interdependence between plasmas and magnetic fields. These new theories can then be tested through observations and spacecraft measurements to help answer big questions about the formation of our universe.