2021: Dr Justin Rustenhoven from the University of Auckland has been awarded a Rutherford Discovery Fellowship for research titled ‘Cleaning the brain drains: Augmenting meningeal lymphatic dysfunction in aging and neurodegenerative disease to alleviate cognitive decline’

Dr Justin Rustenhoven completed his PhD in Pharmacology at the University of Auckland in 2017, for which he received the Vice Chancellor’s Prize for Best Doctoral Thesis. Dr Rustenhoven then travelled to the USA to perform postdoctoral research, first at the Centre for Brain Immunology and Glia at the University of Virginia, and then at the Department of Pathology and Immunology, Washington University of St Louis. Dr Rustenhoven is a vascular biologist and neuroimmunologist who is interested in the interactions between the central nervous system and the immune system, investigating how they contribute to health and disease.

The human brain requires a large amount of energy to function and the waste produced from this energy production has to be removed, or it will build up in the brain. Our bodies achieve this through the lymphatic vessels, situated in the tissues surrounding our brain, which work like drainage pipes removing waste. During aging or in Alzheimer’s disease, these pipes shrink. The resulting failure to remove waste is believed to be a significant contributor to the cognitive decline seen in dementia. If this drain blockage could be cleared, restoring brain waste removal, this could have significant benefits for patients with such neurodegenerative diseases. 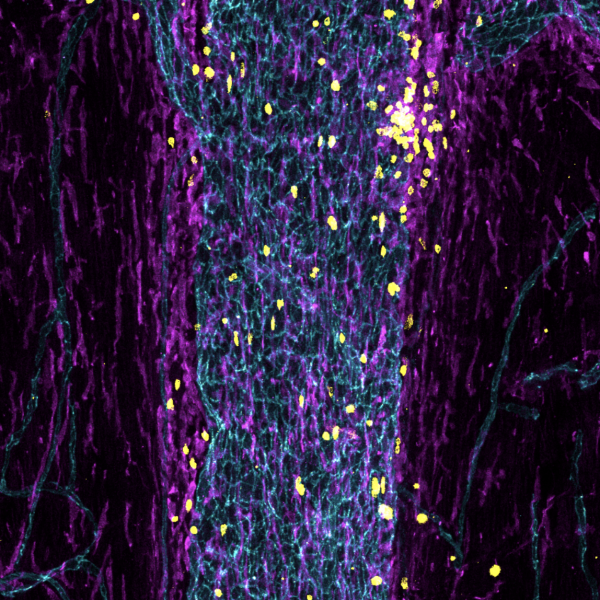 T cells (yellow) and antigen presenting cells (magenta) —components of an inflammatory immune response — situated around the dural sinuses (cyan) which surround the brain. This is where the “drain pipe” lymphatic vessels, which remove waste from the brain, are located (Credit: Dr Rustenhoven).

Surprisingly the processes underlying lymphatic dysfunction are not well understood. What can be said is that aging is associated with a generalised inflammatory response, and Alzheimer’s disease is associated with inflammation in and around the brain. Dr Rustenhoven has generated exciting new evidence identifying inflammatory changes in the lymphatic vessels that drain waste from the brain, and this inflammation may contribute to age-related cognitive decline. This finding suggests that targeting this inflammation could represent a new approach to treating dementia. 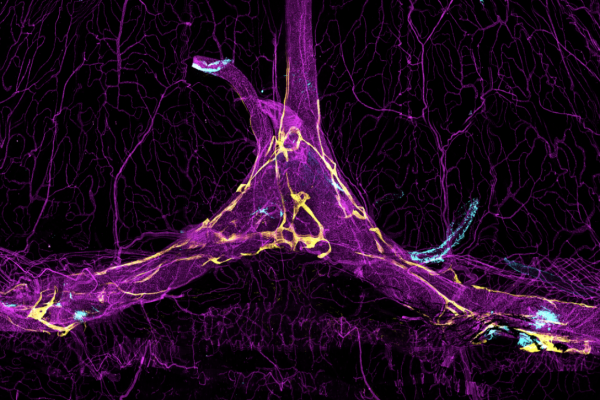 The overarching goal of this Rutherford Discovery Fellowship is to investigate how inflammation in the lymphatic vessels around the brain contributes to lymphatic dysfunction, and attempt to reverse this in aged and Alzheimer’s disease models. If lymphatic dysfunction can be reversed, this could offer new hope for therapies for slowing dementia, as opposed to current treatments which can only manage disease symptoms.