Dr Phoebe Macrae wants us to understand the complex act of coughing, swallowing, and breathing.  Our Adam’s apple (also known as the larynx) acts as valve to protect our airway. This valve stays open while we breathe. You’ll notice that breathing stops when you swallow, because we close the larynx to stop food entering the lungs. If this process goes awry, the natural response is to cough, which serves to protect our lungs from irritants if swallowing fails to close the larynx.

These are survival functions present in all of us. However, almost 9,000 New Zealanders are diagnosed with a swallowing impairment each year, with Māori highly represented in the affected population. 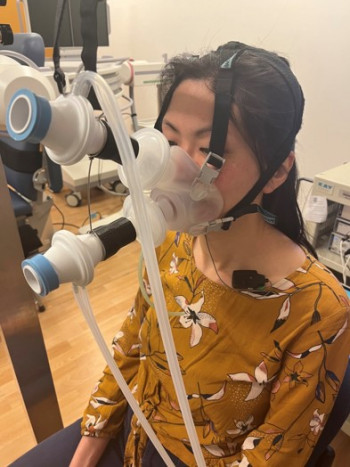 Dr Karen Ng (Postdoctoral fellow based at the Rose Centre) with a respiratory-swallowing coordination mask on, as part of Dr Phoebe Macrae's research. Photo: Supplied.

Coughing and swallowing are linked with our respiratory system (breathing), and all three require precise coordination. Dysfunction in swallowing and coughing frequently occur together, and critically compromise the airways. Swallowing impairment is associated with various medical diagnoses including stroke, dementia, traumatic brain injury, and head and neck cancers.  Almost one third of affected patients will die from secondary complications, such as pneumonia. Many other disorders, including chronic cough, reflux, and obstructive sleep apnea, also alter the relationship between swallowing, coughing, and breathing. There is an urgent clinical need to better understand the interaction of these functions to improve diagnosis and management for affected patients.

Dr Macrae’s research will address how disruption of normal sensation in the larynx can alter a patient’s ability to breathe normally. She will utilise a multidisciplinary approach, bringing together specialists in physiology, biochemistry, and mechanical and computer engineering to tackle the complex interplay of breathing, swallowing, and cough. Together, the team will design approaches to precisely measure the complex interplay and allow more reliable estimates of larynx dysfunction.

Dr Macrae will also bring a Kaupapa Māori approach to the research, working in partnership with relevant organisations and individuals (including Ngā Pou Mana and Canterbury District Health Board Kaimahi Hauora Māori) to address the wider aspects of inequity associated with treatment access for swallowing, coughing and respiratory dysfunction. Dr Macrae co-leads Ākonga Māori rōpū to provide additional connection and support for Māori students in this field. These hui facilitate whakawhanaungatanga, and provide opportunities to advance Te Ao and Te reo Māori knowledge, and support research and clinical development of students. She is passionate about encouraging students to engage in meaningful clinical research collaborations, as this will bring forward a culturally responsive service delivery for all.