Collaborator, Manvir Singh, conducting a listener experiment with a Mentawai shaman in Sumatra. The participant is listening to an example of music from another society and rating how much he thinks it is "used to soothe a baby". Credit: Luke Glowacki

In 2021, Dr Mehr was recognised as a Rising Star by the Association for Psychological Science. Dr Mehr’s work is at the cutting edge of the psychology of listening, sound and music.  He is also a pioneer in citizen science as the founder of themusiclab.org.  This psychology-of-music research platform is where over 4 million participants to date have taken part in Dr Mehr’s diverse musical experiments. 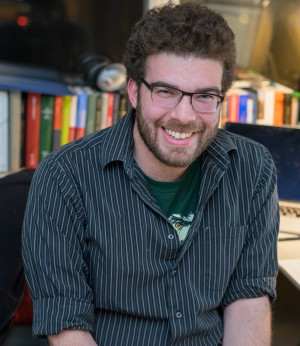 Why are people musical? A widespread and ancient activity, precursors to music are found across the animal kingdom, in the forms of animal calls and sound perception abilities. Music is an important part of the human experience and appears across societies with remarkable diversity.  As such, music appears to be ingrained in our psychology, and our brains are specialised for music perception and production.

Dr Samuel Mehr has been awarded a Rutherford Discovery Fellowship that will unite ideas from the evolutionary and behavioural sciences to address the psychological and cultural foundations of music.

To investigate how the human mind makes sense of music, Dr Mehr will use themusiclab.org as a vehicle to recruit participants in a citizen science study anticipated to involve hundreds of thousands of volunteers. Studies will include people with rare music perception deficits and infants to study human music perception abilities and how they develop. Dr Mehr will also investigate the cultural foundations of music production. Cultural-evolutionary approaches will be used to investigate the diversity and commonalities of music from different cultures, uncovering the links between form, function, and emotion in music.

Together, this research programme will identify the core principles of how and why human minds across cultures understand and make music, and how we evolved to do so. This research will advance the basic science of music, psychology, and cultural evolution.