Twenty-one top researchers were presented with awards at this year’s New Zealand Research Honours, hosted by Royal Society Te Apārangi and held at the Viaduct Events Centre in Auckland.

The gala event was timed to fall exactly 150 years from the date that the Royal Society Te Apārangi was established (10 October 1867).

In addition to the 19 medals and awards presented by Royal Society Te Apārangi, the Health Research Council of New Zealand presented two medals. 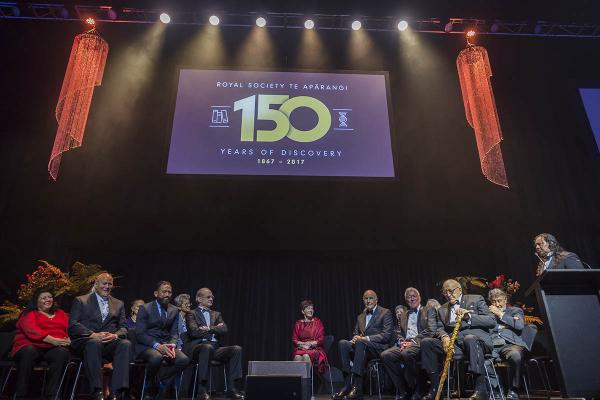 Photographs: View a selection of photographs from the night.  (UPDATED with additional photos)

Royal Society Te Apārangi President Professor Richard Bedford QSO FRSNZ said it was wonderful to be able to gather together to both celebrate the Society’s 150 years as well as honour and celebrate some of New Zealand’s most outstanding researchers.

“To set us on the right path for our next 150 years we announce two significant steps forward for the Society. Firstly, next year we will award a new Māori medal: Te Puāwaitanga, the top medal for research that has made an eminent and distinctive contribution to Te Ao Māori, and to Māori and indigenous knowledge. This will be followed by two more Māori research medals, to be announced next year.

“Secondly, we have elected our President-elect, Professor Wendy Larner FRSNZ, Provost at Victoria University of Wellington. She will take over as President on 1 July 2018, as the second female President of the Society’s Council. We look forward to a more equitable gender balance in our Presidents during the next 150 years. 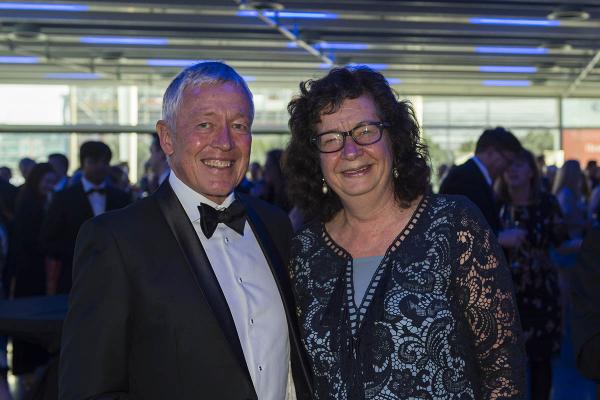 “From our earliest years, the Society has supported the discovery and sharing of new knowledge.

“We are pleased to award prizes to early-career researchers who have made remarkable discoveries and contributions for their stage of career, as well as recognising the outstanding contributions researchers have made over careers spanning many decades.

“Many of the medallists have made discoveries about New Zealand’s exciting geology – and how to build structures to cope with that. Others have made remarkable achievements in drug discovery and chemistry that could revolutionise how we treat disease, build computers and preserve our environment.

“Tonight we also celebrate the achievements of our humanities and social science researchers who have given us new insights into organisations, word-formation, and how we can overcome social injustice so that all people living in Aotearoa can thrive. A number of our medallists have made outstanding contributions to understanding and promoting Māori history, culture and social participation.” View President's speech.

The top honour, the Rutherford Medal, presented for an exceptional contribution to New Zealand research, was awarded by Royal Society Te Apārangi to volcanologist Professor Colin Wilson FRS, FRSNZ of Victoria University of Wellington. His research has shown how large volcanoes behave before and during explosive eruptions, including those that created Lake Taupo, expanding our understanding of volcanoes and the hazards they pose.

The Governor-General, Her Excellency Dame Patsy Reddy, presented the Rutherford Medal, which carries a $100,000 prize from the government. 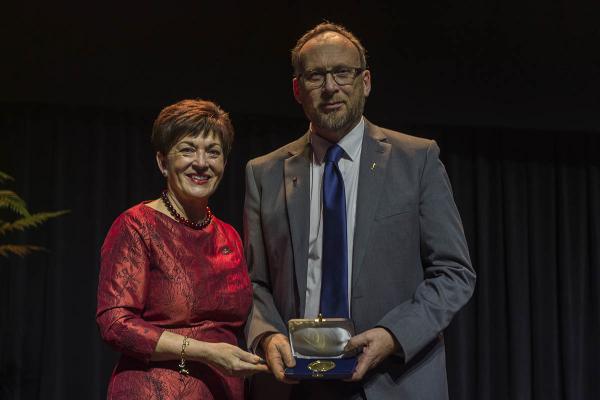 The Liley Medal was awarded by the Health Research Council of New Zealand to dentist Associate Professor Jonathan Broadbent, University of Otago, for a study showing a clear long-term association between a child’s upbringing and the state of their teeth as a middle-aged adult.

The Health Research Council of New Zealand also awarded the Beaven Medal to Professor Alistair Gunn, University of Auckland, for pioneering the use of mild cooling to treat babies with brain injuries at birth.

The Thomson Medal was awarded to Professor Charles Eason CRSNZ. He received this medal for his inspirational leadership in his research career, particularly in the areas of drug development and pest control, and also as the Chief Executive of the Cawthron Institute in Nelson, which has expanded its expertise in aquaculture breeding, seafood safety, nutraceuticals and coastal and freshwater ecology.

The Callaghan Medal for science communication was awarded to Professor Peter Shepherd FRSNZ, University of Auckland, for developing activities to increase the understanding of science by the New Zealand public. These include a programme to keep biology teachers, and their students, up to date with the latest developments in the life sciences and expanding the Queenstown Research Week.

Professor Sally Brooker FRSNZ, University of Otago, was awarded the Hector Medal for designing and making molecules with exceptional properties such as the ability to act like a switch or magnet or to accelerate chemical reactions. Some of these molecules may contribute to a ‘greener’ future, allowing creation of compostable plastics or even the production of hydrogen from light energy, which would be the ultimate ‘green’ fuel.

Dr Roger Cooper FRSNZ, GNS Science, has been awarded the Hutton Medal for his contributions to understanding the geological foundations and the earliest organisms of Zealandia and beyond and for his role in maintaining and developing paleobiology expertise in New Zealand, which uses rocks to study ancient biology.

Emeritus Professor Laurie Bauer FRSNZ, Victoria University of Wellington, has been awarded the Humanities Medal for his influential research in descriptive linguistics. His world-renowned research has focussed on word-formation, the description of New Zealand English, and the sound structure of language.

Professor Cris Shore FRSNZ, University of Auckland, has been awarded the Mason Durie Medal for his contributions to political anthropology and the study of organisations, governance and power. He has pioneered the use of anthropological methods to study policy and institutions.

Professor Ngahuia te Awekotuku MNZM has received the Pou Aronui Award for her outstanding service to humanities-aronui over 40 years, showing an enduring commitment to indigenous culture and heritage. She is an acclaimed author of award-winning research and works of fiction and poetry, recognised arts curator and critic, and stalwart of Writer’s Festivals locally and overseas.

Professor Tracey McIntosh, University of Auckland, has been awarded the Te Rangi Hiroa Medal for advancing our understanding of enduring social injustices that undermine Māori wellbeing and inhibit social cohesion and meaningful cultural diversity in Aotearoa.  Her research focuses on how to correct the intergenerational transmission of social inequalities, how they pertain to Māori, and influence new indigenous knowledge and policies that work for Māori and the nation.

Professor Murray Cox, Massey University, has been awarded the Te Rangi Hiroa Medal for his anthropological work to reconstruct processes of transformation and change in past societies using genetic data. His research has revealed a number of social features from the past such as marriage rules and farming expansion in South East Asia.

Professor Peter Tyler FRSNZ FNZIC, Victoria University of Wellington, has been awarded the MacDiarmid Medal for designing and synthesising a new raft of potential drugs that target the enzymes of many diseases. This has led to the development of newly approved lymphoma drug, Mundesine, that is giving patients new hope.

Professor Stephen Henry, Auckland University of Technology, has been awarded the Pickering Medal for his development and commercialisation of a surface-modification technology, called Kode™  Technology, which shows huge promise for therapeutic use including fighting cancer, reducing surgical infections and healing wounds.

Professor Ian Woodhead, Lincoln Agritech, has been awarded the Scott Medal for advancing electronic engineering, particularly in developing sensors for the agricultural and environmental sectors, including an electric fence performance sensor, and an electronic soil moisture sensor that allows for more efficient irrigation systems.

Dr Aroha Harris, University of Auckland, has been awarded the inaugural Royal Society Te Apārangi Early Career Researcher Award in Humanities for her substantial contributions to the award winning Māori history, Tangata Whenua: An Illustrated History, which spans the entirety of Māori history. She was lead author of the section on sociocultural history of twentieth-century Māori.

Ryan Thomas, a PhD student at the University of Otago, has received the Hatherton Award for experimental work leading to the first direct observation that certain atomic particles follow what’s known as the Pauli exclusion principle when colliding multiple times, so long as sufficient collision energy is maintained. This work demonstrates and extends our knowledge about the fundamental properties of quantum particles.

Dr Danny Osborne, University of Auckland, has been awarded the inaugural Royal Society Te Apārangi Early Career Research Award in Social Sciences for advancing understanding of the psychological barriers to collective action. His research examines New Zealanders’ attitudes and shows that people’s basic needs for stability, beliefs about their collective ability to change the system, and culture specific beliefs about past injustices all undermine collective action.

View more on winners and event